Shimla: Finding the Virbhadra Singh government short on honouring a mandate secured three months ago, Maheshwar Singh, president Himachal Lokhit Party (HLP), put it on notice for not delivering on the issues for which the people voted the party in.

Talking to reporters, the lone HLP legislator in Vidhan Sabah said, “other than acting against one land deal case in Solan district, the Congress government has not moved on any of the burning issues for which BJP was voted out and the current government was handed power.”

He was referring to the government having dispossessed a Baba Ramdev run trust of government land leased out at Sadhupul, Solan. 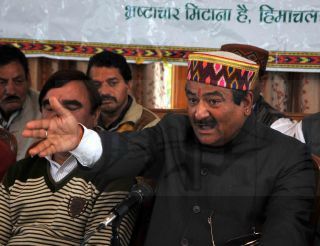 [box]Mere words would not do for if the government is to maintain its credit worthiness, the people want to see it act against corruption, which was one of the biggest issues in the elections. So far, no concrete steps have been taken against corruption, he said.[/box]

Maheshwar, who has been a former MP, counted cases of Forest Conservation Act violations for setting up eco-tourism ventures on forest lands, violations in setting up of a luxury hotel by HP Cricket Association at Dharamsala, Bamloe land case and phone tapping case on which the Virbhadra government was  found wanting for its inaction.

Illegal phone tapping is a criminal offence as it is a serious invasion of privacy, yet why no case has been registered, he questioned.

Violations in changing land lease laws for setting up the HPCA hotel in Dharamshala was as much a part of our charge sheet as it was that of Congress, but after assuming power, the Congress government has handed out a bar license for the contentious hotel,” said Maheshwar.

[box]The government has not moved on the Bamloe apartment case, where serious violations in a forested area have been pointed out.[/box]

Drawing attention to a earlier government policy formulated to legalize encroached lands, the HLP president said that relief needed to be provided for small encroachments by allowing a onetime settlement but forest and other big violators needed to be proceeded against.

Farming and horticulture was facing a serious threat from outgrown monkey populations and the government needed to deal with the problem in a campaign mode if farming is to kept as a sustainable livelihood activity, he said.

Chief Minister Virbhadra Singh has made some public statements about bring the corrupt and law violators to book, setting up of special investigation team (SIT) and other such measures but by taking no action, one would not be able to be fool the people, he said.

He added that HLP would give another 3 months of the allowed honeymoon period to the Virbhdara Singh government and should the government not act upon the issue for which it was voted, Himachal Lokhit Party would resort to holding of protests and demonstrations.

The HLP president ruled out all possibilities of joining the Congress government. “We will not compromise on our stance and there is no question of my joining the government, he said.

[box]Illegal phone tapping is a criminal offence as it is a serious invasion of privacy, yet why no case has been registered, he questioned.[/box]