Shimla: Both the SCA and ABVP are protesting against the recent price hike decision. But, their protests at the Himachal Pradesh University are not united. The voice against the B.Ed. Prospectus issue is soaring high but it’s strange that protests are largely disparate.

Ironically, both groups are not only raising slogans against the VC but also against each other.

The situation for sure has created trouble for the HPU VC. Earlier, the VC was stopped on the campus gate from entering the University by ABVP students. Since then, the whole university campus has been under tight surveillance by the police. New security measures undertaken to address possible unpleasant happenings in near future are also causing discomfort to a large number of students.

Many students on the campus agree that he ambiance at the university is not healthy for the last few days. ‘Daily protests are troubling students on the campus,’ said Manoj Kumar, an HPU student. Another student, Nandini Walia wonders why the two groups on the campus are carrying on divided protests if the issue and the demands are the same. “Both should come forward together if they are really fighting for student welfare,” she said.

Apparently, student organizations do not appear to look at the matter the way students on the campus do.

ABVP Campus activists Navneet Kaushal, Ritesh, Kushal Kaundal and other members hold the VC responsible for the prevailing situation. According to Kushal, they are working for student welfare.

SCA and SFI, on the other hand, are against university authorities too.  SFI Vice President Hoshiyaar Singh claimed that the situation can get better if VC agrees on working out the solution of prospectus price issue. He indicated that the protest would continue as the demands have not been met so far.

Protests are likely to continue. Due to the ongoing tussle between student organizations and university authorities, it’s the students coming to the university with intent to study and learn something everyday who’ve to pay the price. 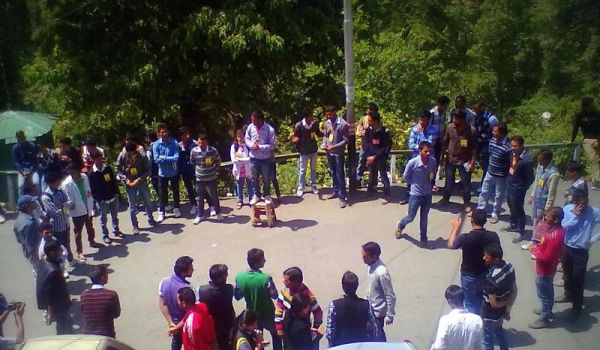