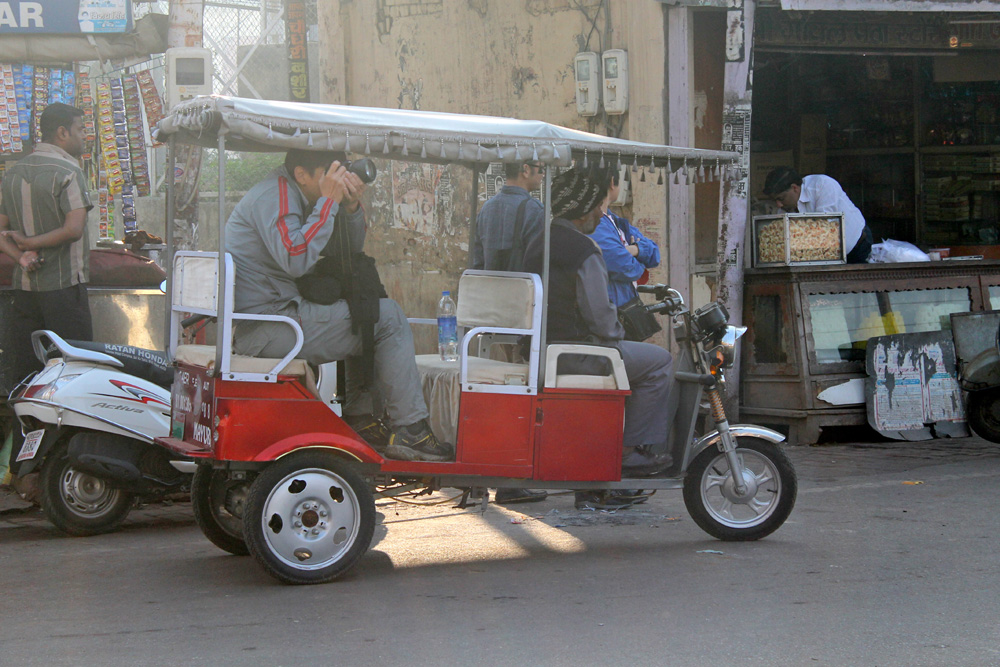 Agra, April 30 (IANS) The city of the Taj is now aiming to show visitors that there is much more to it than the monument to love. Discovering Oriental Agra, a new tourist circuit, will showcase not just heritage monuments but also the city’s culture, cuisine and industry – in electric rickshaws.

Described as a “journey through the heart of the Taj city”, the daily hour-long tour that was formally launched Sunday has been organised by members of Agra Beat, a group seeking to promote alternative tourism. While a number of rehearsals have been conducted, regular tours will begin in the first week of May.

“We offer foreign visitors a ride in an electric rickshaw every morning through the city to acquaint them with the real culture of Agra and its cosmopolitan legacy. The rickshaw takes them through the old bazaars, traditional eating joints and places of worship,” a member of Agra Beat said.

“Agra is a melting point of cultures. It lives in three distinct zones: the Hindu Agra, the Muslim and the Christian,” Amit Sisodia, the leader of the group, told IANS.

The tour will initially be conducted on four electric rickshaws that can each carry four passengers but more vehicles can be arranged if the demand rises. There is one guide per two rickshaws and passengers pay Rs.500 per head.

The tour starts from the gurdwara near the Taj Corridor.

“Tourists get to see Dara Shikoh’s library, Mirza Ghalib’s birthplace, the headquarters of the Radhasoami faith, the ancient Manka Meshwar temple, the Jama Masjid, and churches of different Christian sects, as also St. Patrick’s Junior College – Asia’s oldest convent – and the Akbar Church. On the way, they will see the early morning bustle at the shoe mandi in Johri Bazar, the only street of Ayurvedic doctors, the paan mandi, the petha mandi and the chaat-pakori street of Seth Gali,” Sisodia said.

Braj Mandal Heritage Conservation Society (BMHCS), which has mapped out the route, is collaborating with the project.

“You have stone heritage and you have live heritage, the vibrant cultural rhythm of a city waking up early morning and people rushing off to their workplaces. Mainstream tourism is too Taj Mahal-centric. Now there is a need to add colour, adventure and some Indianness to the tour. Tourism must be everybody’s business, or nobody will gain from it,” BMHCS president Surendra Sharma told IANS

Group members said the initial response was encouraging. A buzz has been generated around the event.

“Our project will also force the municipal authorities to clean up Agra’s roads and streets. The journey will wind its way through the narrow, dingy lanes of Agra, where people can see the grand old havelis (traditional homes), the oriental bazaars of Kinari Bazaar or Lohar Gali or the spices street Rawat Para. At the early morning shoe mandi, tourists will be able to buy cheap and decorative shoes from local manufacturers,” Sisodia explained.

Shravan Kumar Singh, a conservationist, said: “People who arrive on short trips as tourists often miss the mohalla culture in the crowded Katras, the aroma of halwai shops, the images of so many people engaged in doing odd jobs which we sometimes think is left only in history books, or in poems by Mian Nazeer Akbarabadi.”

“As one meanders through the bylanes, it’s difficult not to cough and sneeze, because this area is also the wholesale market for chemicals and spices. The high balconies still retain the old-world charm,” said Anand Rai, an enthusiastic supporter of the tour.

The oriental flavour of the bazaars should be retained, Rai said, adding: “Look at Varanasi, which is always crowded with foreigners who wait at the ghats for hours to see the evening arti.”

Through Lohar Gali, the poorly-lit cosmetics bazaar, the tour touches the outer periphery of the Agra Fort station, perhaps the only such in the world so close to two great heritage monuments – the Taj Mahal and the Agra Fort – and overlooking the historic Jama Masjid in Johri Bazar.

“We were trying to follow the heritage track suggested by Lucy Peck in her book ‘Agra: The Architectural Heritage’ published by INTACH. But our aim was to see the Muslim, Hindu, Sikh, Christian and Radhasoami flavours of the composite Agra culture that evolved over five centuries,” Surendra Sharma told IANS.