Kullu: The Bharatiya Janata Party (BJP) state executive held a meeting here to deliberate on various issues concerning the state and the Lok Sabha elections, with main focus on the Mandi Parliamentary seat. 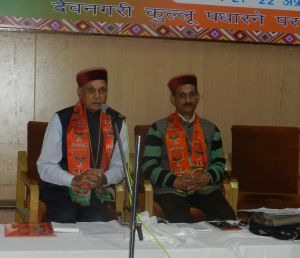 Mandi parliamentary seat, which remains vacant after Virbhadra Singh became the Chief Minister of the State, is a hot topic these days as by-elections for the seat can be announced anytime.

Former chief minister Prem Kumar Dhumal and BJP president Satpal Satti were present at the meeting. The meeting was conducted with an objective to gauge the chances of potential election candidate should the Mandi Lok Sabha bye-election be held in June.

Bharatiya Janata Party is struggling to find a winning candidate for the seat, while chief minister Virbhadra Singh’s wife Pratibha Singh in her recent visit to Mandi expressed her intentions of contesting for the seat on Congress ticket.

Pratibha Singh has represented the Mandi seat in the past; therefore, she is likely the most strongest Congress candidate for the seat.