Islamabad: The attack on Sarabjit Singh could have serious implications for Pakistan-India ties, said a Pakistani daily, adding that the fate of the Indian death row prisoner was caught in the problematic relationship between the two countries.

Sarabjit Singh was admitted to a Lahore hospital after a murderous attack on him in Kot Lakhpat jail April 26. He is in coma. His family has arrived in Pakistan on a special visa issued by the Pakistan government. 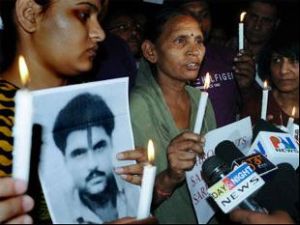 Sarabjit Singh’s “fate has been caught between India and Pakistan’s problematic relationship that hardly saw smooth and steady sailing all these years. His mercy petition remains pending”, said an editorial in the Daily Times.

The incident has drawn protests throughout India with some terming it a conspiracy to kill Sarabjit Singh. Indian Prime Minister Manmohan Singh has described the attack as a very sad incident. The Human Rights Commission of Pakistan has also condemned the attack as a dastardly act.

The daily said that high profile prisoners on death row such as Sarabjit Singh are kept isolated in special barracks in jails.

“…That Sarabjit Singh was not only attacked by other inmates with bricks and rods but the attackers enjoyed complete freedom to afflict serious injuries raises serious questions about the security provided to Sarabjit and the environment in which such prisoners are held,” it said.

The editorial pointed out that India and Pakistan both have a “bad history” of treatment of prisoners from across their border.

“There have been cases of prisoners dying in jails in both the countries, but the deaths made little impact because of the status of the prisoners, most of them being fishermen. Now the Sarabjit incident should focus minds in Pakistan (and India) on the need to improve the living and security conditions of inmates from each other’s countries,” it added.

It went on to say that the attack on Sarabjit “could have serious implications for Pakistan-India relations”.

“Forces that oppose better bilateral relations have been disrupting the peace process through one means or another. For a consummate response to the incident, a thorough investigation into the attack should be carried out by the government, followed by punishment to the culprits,” it stressed.

The editorial noted that the incident is “a stark reminder of things that we have been ignoring since long now”.

“One, human rights have been conspicuous by their absence in both the countries, leaving little room for prison inmates in particular to be considered worthy of attention and care. Two, security has been a consistent issue with Pakistani jails.

“…it is Pakistan’s responsibility to provide safety and protection to people inside its jails irrespective of their origins…finally, Pakistan and India’s relations have been deprived of continuity of dialogue that could frustrate elements bent on destroying peace between the two,” it said.

“Ultimately it is now Pakistan’s responsibility to gather the spilt beans and keep bilateral relations from deteriorating by getting to the bottom of the case,” the editorial added.