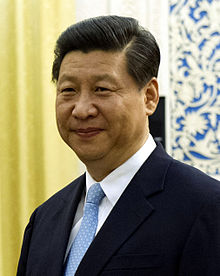 Beijing (IANS) Xi Jinping today became president of China, the world’s most populous and one of the most economically powerful nations, completing a once-in-a-decade crucial leadership change. He will also head its powerful military.

He was formally elected the president barely four months after he took charge of the Communist Party of China (CPC), an event that marked the initiation of the transition process in the highly secretive nation.

The Communist Party is the ruling party in China and has nearly 70 million members in more than three million grassroots organisations. The CPC has established formal and informal organisations within the Chinese government and various levels and walks of life in the country, according to people.com.cn.

The Communist Party of China (CPC) came to power in 1949.

Xi, the general secretary of the Communist Party of China (CPC), was picked the chairman of the Central Military Commission (CMC), reported Xinhua. He will now head the 2.3 million-strong and the world’s largest standing military.

The plenary meeting of the first session of the 12th National People’s Congress (NPC) elected Zhang Dejiang as chairman of the NPC Standing Committee.

Known as a straight talker, frugal, hardworking and down-to-earth, Xi is the “princeling” son of Mao Zedong-era revolutionary hero Xi Zhongxun, one of the CPC’s founding fathers.

Seen as having a zero-tolerance attitude towards corrupt officials, Xi has been a trouble-shooter.

Xi is also famous for his celebrity wife, singer Peng Liyuan, who also holds the rank of major general in the People’s Liberation Army.

A well-known Chinese folk singer and actress, Peng regularly appears on Chinese state TV’s New Year gala, the most watched TV programme of the year. She was also appointed World Health Organisation Goodwill Ambassador for HIV/AIDS and tuberculosis in 2011.

Xi has his task cut out since despite a double-digit annual growth rate for about three decades, the Chinese economy is now strained by a shortage of energy and resources, a wealth gap, inequitable income distribution, corruption and environmental woes.