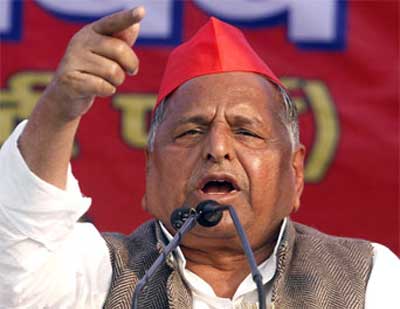 He also speculated that the general elections due in April-May 2014 could be held by November 2013.

“There is no strained relationship with the Congress. There is no talk of withdrawal of support (to the UPA) even within our party,” Yadav told CNN-IBN news channel in an interview.

“It’s (supporting Congress) a political compulsion. We have been fighting against communal forces (read the BJP). When we were fighting alone against the communal forces, only Chandra Shekhar-ji was in touch with us. After Ayodhya (the Babri mosque demolition in 1992), it was for us to protect the unity of this country. Otherwise, the Muslims would have felt nobody stood by them,” he said.

Yadav said the next Lok Sabha polls could be held in November this year.

“Elections will not happen in May. There will be early elections. This is the analysis… Elections will happen this year itself, maybe in November. Election process of all parties has already begun,” he said.

Yadav denied he was moving closer to the BJP.

“What is the meaning of being cosy to the BJP? If I’ve fought with anybody, then it was Advani-ji. When I was fighting against the BJP, the Congress was a silent spectator,” he said.

“The people have appreciated my statement on Advani-ji. But it’s strange that leaders from both the parties — Congress and BJP — are criticising me,” he said.

Noting he had no ambitions to be the prime minister, Yadav said he was hopeful of a Third Front, rubbished by both the Congress and the BJP.

“I have no ambitions of being a prime minister,” he said.

“Whenever a Third Front has come into existence, nobody had any prior idea about its formation. It came spontaneously. I think this time also, it will happen like this. Many parties will come with us,” he said.

“After the election, if the situation demanded, the parties may come together and form the Third Front. Always the Third Front has come into existence after elections,” Yadav said.