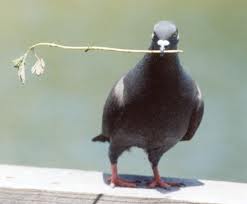 New Delhi: It was a daring middle-of-the night heist that has left Delhi Police baffled as the stolen goods are not jewellery or cash, but around 150 homing pigeons!

Shabbir Mohammad, 26, stays at Abul Fazal Enclave in Jamia Nagar in south Delhi near the Jamia Millia Islamia university. His pigeons were stolen on the midnight of Feb 7, said police. The robbers broke the locks of the three large metal cages on the roof of his house in which the pigeons were kept and decamped with the birds.

“My family used to keep pigeons as pets for the past several decades and we have been doing since then it is an ancestral passion. Those birds were like family members,” Shabbir told IANS.

Shabbir said he would feed the birds in the morning with wheat, bajra and rice, and let them free on the roof. The birds would fly and come back every dusk on the terrace and he would put them back in the metal cage, and lock it for the night.

All the pigeons are of Indian varieties.

Shabbir’s father Abdul Majid, 65, told IANS: “We do not keep pet pigeons for business. My father used to keep hundreds of pigeons. Now we live with them under the same roof.”

“After the theft, only 60 pigeons are left with us. We are hoping to get the stolen pigeons back, Insha Allah,” he asserted.

According to a police officer, stealing pigeons is a very old trend in the capital, but most of the people don’t report such incidents. Pigeon theft cases are common in the Jamia Nagar area, Haji Colony and Zakir Nagar, but no formal complaint has been received.

Police have collected footage from the close circuit television camera installed outside a neighbour’s house.

According to police, two people were seen roaming between 2 a.m. and 4 a.m. outside Shabbir’s house. Many people have been questioned, including neighbours and relatives.

Abul Fazal Enclave is a crowded Delhi neighbourhood, largely populated by Muslims, where people are known to keep pigeons. People keep them as pets for selling and also train them as pigeon fighters for betting. Most of the houses in the area have hundreds of pigeons on their rooftops.

Delhi’s central district areas, specially Jama Masjid, famously known as Delhi-6, has a rich culture of taking care of pigeons, feeding them, training them for various games and as pets. These birds are an integral part of some families around Jama Masjid.

“The incident of pigeon theft is very common in our area. People used to complain to police but we have never heard of such a huge number of stolen pigeons. Some gang might be involved in the incident,” Mohammad Ali, a pigeon seller near Jama Masjid, told IANS.

The pigeon market is held every Friday and Sunday at Kinari Bazar near Jama Masjid.

Pigeon race and fighting are among the “games” popular in in these areas.