Dehra Dun : In the 2009 Lok Sabha elections, the Congress won all the five seats in Uttarakhand. The party will be praying with its heart and soul for a repeat in 2014, and the national vice president, none other than the crown prince himself, Rahul Gandhi is in the state capital to motivate the rank and file, besides listening to grievances of the workers. He is in for a rude shock. 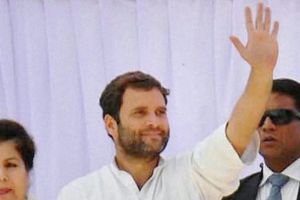 The party here is in shambles. If the chief minister, Vijay Bahuguna, has done anything worth the name in the one year that the government will complete on Mar 13, it is ensuring that another crown prince comes to centre stage in this small hill state. This crown prince is none other than his son, Saket Bahuguna, who was made the Congress candidate for the Tehri by-election, but created a record of sorts by losing to the BJP greenhorn, despite his father being the chief minister.

There have been bickering galore in the Congress in Uttarakhand, not from now (things have only worsened) but even before the March 2012 vidhan sabha elections. The party which was confident of winning 42 of the 70 vidhan sabha seats, riding the wave of the spate of allegations against a former BJP chief minister had to be content with 32 seats. It formed the government riding piggyback on the BSP and the UKD.

And then it got the jolt, which the party workers were looking forward to. Saket Bahuguna lost the Tehri-by-election, the seat which his father had vacated when he took over as the chief minister. It is true that Vijay Bahuguna himself won by a record margin o votes from the Sitarganj assembly segment, which in a surprise move was vacated by a BJP MLA, but the honeymoon with the masses proved to be short-lived.

Though party workers here said that Rahul’s visit is just a part of his visit to various states to gear up the party rank and file for the 2014 Lok Sabha elections, but they were also of the view that various acts of omission and commission that have become the talk of the town, will definitely be put before the party national vice president. The inner-bickerings and discontentment, besides differences amongst the top party leaders of the state, will definitely be brought to his notice, they claimed.

However, a portion of the workers alleged that the senior party leaders had made sure that some vocal elements within the state unit of the Congress are not allowed to meet Rahul Gandhi and have been denied the required passes. This would only make it that much harder for Rahul Gandhi to understand the truth of the existing ground realities and draw up a comprehensive plan for the state, they felt.

They claimed that there is hardly anything for the government to show as achievements in its one year in office, for tho9ugh March had started most of the departments had still to utilize as much as 70 per cent of the budget provisions made for them for this financial year. If the party has to retain all the five Lok Sabha seats in the state, there has to be something drastic that needs to be done to sway the people, they felt.