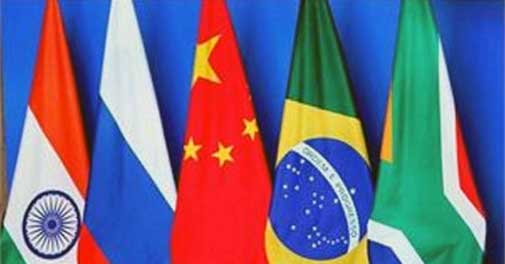 In his departure statement ahead of leaving for Durban Monday, the prime minister said he hoped to discuss a host of issues with leaders of other BRICS nations, as also those from Africa invited to the summit, during his bilateral meetings on the margins of the event March 26-27.

“At a time when the world is facing multiple challenges, the Durban Summit provides a useful and timely opportunity to consult and coordinate on a broad range of issues with our BRICS partners,” the prime minister said.

“We will discuss ways to revive global growth and ensure macroeconomic stability, as well as mechanisms and measures to promote investment in infrastructure and sustainable development,” he added.

“India will also urge faster movement on reform of institutions of global political and economic governance. It is important that BRICS continue to consult on developments affecting global peace and security.”

The prime minister is accompanied by Finance Minister P. Chidambaram, Commerce and Industry Minister Anand Sharma, National Security Advisor Shivshankar Menon, besides other senior officials. He is to hand over the BRICS chair to South Africa at the Durban summit.

Manmohan Singh said this would be the first BRICS Summit on African soil and Africa “will be an important theme of the Durban Summit”.

The prime minister said he was looking forward to “substantive bilateral meetings” with other BRICS leaders, including new Chinese President Xi Jinping.

“It will be an opportunity for me not only to greet the new Chinese president personally, but also to discuss how we can maintain the positive trajectory of our relationship and further strengthen this very important bilateral relationship.”

“I also intend to review with President Putin of Russia the progress in India-Russia relations after the successful Summit in Delhi in December 2012,” he said.

He would also be meeting President Zuma of South Africa and President Dilma Rousseff of Brazil, both of whom would be in Delhi in June for the IBSA (India, Brazil, South Africa) Summit.

He said the bloc over the last few years had “emerged as a consequential voice in the international arena”.

The summit is likely to see more concrete shape given to the ambitious move of setting up a BRICS Development Bank and the economic viability of trading in local currency.

Egyptian President Mohamed Morsi who is attending the summit, has evinced keenness to join the bloc – to make it E-BRICS. The issue is to be discussed at the meeting of “sherpas”.

There will be four deliverables at the summit – the eThekwini Declaration, setting up of BRICS Business Council, setting up a Consortium of BRICS think tanks and two agreements among development banks (BRICS multilateral infrastructure co-financing agreement for Africa and BRICS Multilteral cooperation and co-financing agreement for sustainable development).