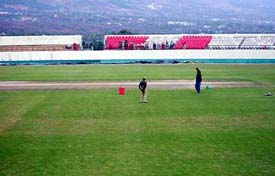 Dharamsala: The Himachal Pradesh Cricket Association (HPCA) will not be provided security free of cost by the state government during the forthcoming IPL matches in its stadium here in May, Chief Minister Virbhadra Singh said Saturday.

He said the match organisers would have to foot the security bill.

“The government would charge for providing security to any event which is commercial,” Virbhadra Singh told reporters in Kangra, near here.

The HPCA, he said, is a commercial organisation, so it would be charged accordingly.

“Earlier, it was the domestic rule of the organisers but this time they should abide by law,” the chief minister added.

Official sources told IANS that during the past seven IPL matches in last three seasons, the state government headed by Dhumal had not charged HPCA security fees.

“This rule (of charging match security bill) is not only in Himachal but in all over India. The role of the police is to maintain law and order and not to work for the business tycoons,” Virbhadra Singh said.

According to information accessed by Right to Information (RTI) activist Dev Ashish Bhattacharya, Rs.2.36 crore was incurred by the state police on providing security for the five IPL matches held in Dharamsala during the first two IPL seasons in 2010 and 2011.

The HPCA’s new showpiece venue, located at an altitude of 4,000 feet above sea level, with the mighty snow-clad Dhauladhar Ranges forming the backdrop, witnessed the fifth and final ODI between India and England Jan 27 this year.

The stadium, 250 km from Shimla, has a 21,600-seating capacity, besides a world-class indoor stadium comprising video analysis facilities for both bowlers and players, a club lounge, restaurant, bar and banquet hall.-