Bhopal: A diehard fan of cinema of the 1980s, director Sajid Khan is attempting to recreate the magic with his “Himmatwala” remake that he says has all the elements of a bygone era – mother-son drama, heroism and, last but not the least, “a grand entry for (lead actor) Ajay Devgn” that will force viewers to clap. 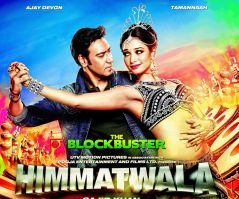 “The film is based in 1983. I have kept references of 1980s. I have included a rush where Mohinder Amarnath LBWed a West Indies player (got him out on leg before wicket) and India won the World Cup (in 1983). For that commentary, I have roped in Ameen Sayani saab, Mr. (Amitabh) Bachchan of radio,” Sajid said during a group interview here.

He clarified that the film not a spoof and would see Ajay fighting with a tiger for the second time after “Vijaypath”.

“If you talk about the 1980s – what used to happen in 1980s movies – it doesn’t happen any more – the hero’s entry. Except for a couple of Salman Khan’s films, no importance is given to the hero’s entry. The kind of entry that Amitabh Bachchan had in “Coolie”, for me, it’s the entry of all time,” said Sajid and added he liked Ajay’s entry in “Phool Aur Kaante”.

“This is an open challenge that if viewers won’t clap on Ajay’s entry in ‘Himmatwala’, I will refund the ticket money.

For his version of “Himmatwala”, Sajid has also roped in southern actress Tamanna.

“When I wrote scenes, I wrote it in the 1980s style. The mother-son drama, hero will fight with tiger, hero will save the whole village, he will be friends with a tiger, and ‘dialoguebaazi’… something that made Mr. Bachchan or Vinod Khanna or Dharmendara a star,” Sajid said.

He rues such films are not being made in Bollywoood any more, but southern filmmakers are keeping the genre alive.

“That kind of cinema is coming now only with two stars – Salman Khan and Ajay,” Sajid said, adding that “Dabangg” and “Wanted” became big hits because they had heroism, which is very prevalent in the south. “In northern India, we are shying away from this and our culture is going more towards western cinema. I wanted to bring that back because I have grown up watching cinema of the 1970s and 1980s.”

Sajid pointed out that director K. Raghavendra Rao’s 1983 “Himmatwala”, which had Jeetendra and Sridevi in the lead roles, “started the wave of the southern cinema (in Bollywood) with ‘matkas’, over-the-top dialogues and Kadar Khan and Shakti Kapoor”.

“But it later became vulgar. From 1987-1988 it got vulgar, but before that it used to be clean-cut comedy, clean family dramas,” added Sajid, who made a successful transition from TV to films with his directorial debut “Heyy Babby”.

He has so far directed three films, including “Housefull” and “Housefull 2”, and all of them were big hits. Sajid however doesn’t take himself seriously as a filmmaker. “I take myself seriously only when I’m making a film. I make it from the audience’s point of view,” he added.