“Mar uske bum pe laat jo tujhe darata hai”—a song in the movie that unquestionably guides audience to follow the suite and kick Sajid Khan’s bum till he repents for his gaffe.

A remake of 1983 blockbuster directed by K Raghavendra Rao starring Jitendra and Sridevi; Sajid Khan’s Himmatwala demands truck loads of himmat from the audience to take a risk of lifetime in order to watch it. 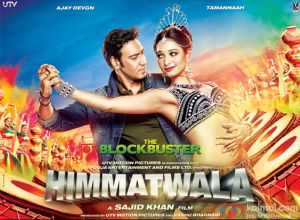 When everyone had almost forgotten the dreadful cinema of 80’s and 90’s there comes Sajid with a “Crap of the Century”.

This self-proclaimed filmmaker has sincerely challenged the “ghatiya” film making capabilities of his clan comprising of sister Farah Khan and brother-in-law Shirish Kunder with this marvelously mis-directed—–only God knows what!

Yet again, Sajid doesn’t disappoint anyone and dishes out same baseless burlesque (Maa Kasam!) he is famous for crafting specially for the audience with dubious thinking ability.

A film review is always uncalled-for his movies. Nonetheless, it is our bounded duty to save all the brothers and sisters of the nation who are planning to annihilate their weekend with the movie.

Ravi who works as a street-fighter in city returns back to his village to seek revenge from the village sarpanch Sher Singh (Mahesh Manjrekar) for all the atrocities bestowed on his family by him. Ravi (Ajay Devgan) falls in love with Sarpanch’s daughter Rekha (Tamannaah Bhatia) and a romantic angle is created. Sarpanch’s brother-in-law Narayandas (Paresh Rawal) abets him in all the shady deals. However, once Ravi plans to avenege the death of his father the story casts into the similar mould as the original film.

There is nothing that could be analyzed properly once you are down with headache watching the flick but “Maa Kasam Filmi Hai” could have been a better title to the remake.

The original movie cemented Sridevi’s place in Bollywood but here is something that would threaten survival of everyone involved in the venture. When Sajid Khan replaced his favorite Akshay Kumar (another progenitor of mindless cinema) to cast Ajay Devgan it was sure that the re-creation of the music of 80’s would be lacking in songs. Who can sincerely expect jammed Ajay shaking legs in typical white boots (aka “Jumping Jack” Jitendra of 80’s) with heroine almost half his age?

The painted “matkas” are intact and so are the hundreds of backdrop dancers in the songs. The ever sobbing mother (Waheeda Rehman) with age old dialogues akin to beta tujhe tere mare baap ki Kasam is replaced by Zarina Wahab.

Male protagonist fights hundreds of men (Dabangg style) bare handed and combats a tiger in a tasteful way. With Gulal flowing in air and heroine showcasing her mid-riff (surely wins over Sridevi simply for her well toned belly) the era has been surely recreated, at least in songs.

To top them all, eternally irritating Chunkey Pandey too manages to creep in through the two and half hour long suicidal drama.

Sonaksi Sinha tries to create some disco magic of 80’s in order to pay tribute to Bappi Lehri’s era with “Thank God it’s Friday” but all in vain.

The movie has surely managed to spark a debate for those who haven’t watched the original Jitendra-Sridevi flick —–Were the people in 80’s mindless zombies to like such movies or is this one awfully recreated?

Interestingly, I found a person with an admiration for the movie after the show but the secret was unleashed later when he even praised Ram Gopal Varma ki Aag.

The movie gets 1 ½ stars on the scale of 5 from Hillpost.