Shimla: Industrial slowdown coupled with investments proposals declining over the last decade has the Himachal government contemplating about making changes in the policy to revamp the sector. 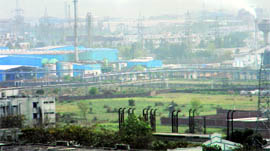 Industry minister Mukesh Agnihotri, who was responding to a question by Kuldeep Kumar, a congress legislator during question hour in the Vidhan Sabha on Thursday , disclosed that the government had approved industrial proposals worth Rs 48,000 crore in the last 10 years but investments worth Rs 13,000 Crore were actually made.

“Where have the Rs. 35,000 crore worth of investments gone,” Agnihotri questioned only to reply himself, “they were never made, simple because of the many procedural lapses involved.”

The minister said that a course correction had been put in place and the government would hold officials accountable for procedural delays.

He said that the governments single window authority has made it mandatory for a time-bound clearances for all investment proposals approved.

“All the necessary clearances for setting up an industrial unit in the state would be given within 90 days after it is cleared by the single window clearance and monitoring authority,” said Agnihotri.

He said that it was noticed that lack of coordination between different departments of the government often resulted into delays.

The government was considering framing a new industrial policy to attract new investments into the state,” he said.