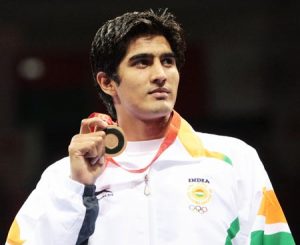 Chandigarh (IANS) Till a week ago, international boxer Vijender Singh was seen in his native state of Haryana as a sports star, a youth icon and a brand ambassador. But a heroin drug haul by the Punjab Police has changed much for the feted Olympics bronze medallist.

Vijender, who was made a deputy superintendent of police (DSP) in the Haryana Police, has become a suspect in a sensational drugs haul being investigated by the Punjab Police. The police had recovered 26 kg of heroin, worth Rs.130 crore (almost 25 million USD) in the international market, from a Canada-based NRI drugs dealer who was operating in Punjab.

Given his sporting success and good looks, Vijender rubbed shoulders with Bollywood stars, celebrities and VIPs at various functions and social events.

Such was his popularity that Congress leader Rahul Gandhi had attended Vijender’s wedding at the Delhi Flying Club in May 2011. Vijender had run into controversy at that time after his wedding reception card carried the national emblem.

Vijender’s name figured in the drugs haul controversy on two counts: One, his wife Archana’s SUV was found outside the apartment from where the police found the big consignment of drugs; second, his fellow boxer Ram Singh, during questioning by the Punjab Police, made startling disclosures, admitting that along with Vijender, he had taken heroin from the arrested drugs kingpin, Anoop Singh Kahlon.

Vijender has been in denial mode, claiming complete innocence in the matter from day one. But things got complicated after he refused to give his blood and hair samples to the Punjab Police investigators for laboratory analysis.

Punjab Police is now contemplating a court move to get Vijender’s blood and hair samples. The police, who questioned Vijender at a Haryana Police establishment near Panchkula for nearly four hours, want to investigate the star boxer’s role in the drugs racket, given the disclosures of his sparring partner Ram Singh.

“Till he satisfies us with evidence that he is not connected to the drugs racket, Vijender will also remain a suspect. By not giving his (blood and hair) samples, he has made things complicated. He is likely to be questioned again,” a Punjab Police officer said.

Haryana’s Director General of Police (DGP) S.N. Vashishth has said that they were cooperating with their Punjab counterparts in the investigations.

“I have assigned Superintendent of Police Hardeep Singh Doon to extend all cooperation to the Punjab Police,” the Haryana DGP said.

Vijender, who was training at the National Institute of Sports (NIS) Patiala (in Punjab, 80 km from here), has sought leave for one week from his training programme for upcoming boxing tournaments.

His fight, it now appears, will shift, in coming days, to outside the ring.