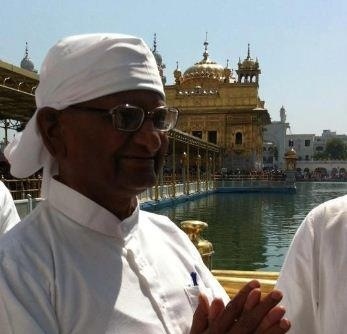 The tour is part of Hazare’s campaign for a stronger Lokpal bill and electoral reforms, among other demands.

The “Janatantra Yatra” will move through Punjab for five days. Hazare, who arrived here Saturday, will address eight rallies in the state.

“The country is headed towards disaster. We want to bring about change,” Hazare, 75, told supporters as he embarked on his tour.

Hazare and his supporters earlier offered prayers at Harmandar Sahib, popularly known as the Golden Temple, the holiest of Sikh shrines. He also offered prayers at the Hindu shrine Durgiana Mandir here before starting his campaign from Jallianwala Bagh.

Hundreds of innocent and unarmed men, women and children were massacred at the Jallianwala Bagh April 13, 1919, by British forces led by Brigadier General Reginald Dyer.

The victims had no escape route when they were fired upon, as the only narrow entrance to the park was blocked by armed troops.

Colonial-era records put the deaths at around 400, while leaders of the country’s freedom movement claimed over 1,000 people had died.

After Punjab, Hazare will enter Haryana and then move on to Uttarakhand.

After a short break, the second leg of the tour will cover Rajasthan, Madhya Pradesh and Jharkhand.

The tour comes exactly two years after Hazare went on a hunger strike against corruption in New Delhi April 2011, followed by a similar agitation in August that year which culminated in a hunger strike in Mumbai in December.

During the all-India tour, Hazare will also work for forming a nationwide organisation of individuals, social groups and NGOs fighting corruption at the grassroots level, his aides here said.