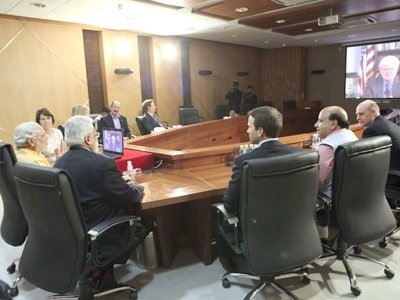 Four US lawmakers, who are among a group of visitors specially chaperoned to meet Gujarat Chief Minister Narendra Modi, have stepped right on it. By it, I mean political turd. The smell on their shoes may not last long but while it does, it would be fairly foul.

Thanks to professional colleagues Hemant Bhrambhatt and Ashok Easwaran, publisher and editor respectively of Hi India, a Chicago-based South Asian weekly newspaper, an ongoing India visit of the four Republican lawmakers and businesspeople has been somewhat upended.

The delegation consisting of Congressman Aaron Schock, Congressman Marlin Stutzman, Congresswoman Cynthia Lummis and Congresswoman Cathy M Rodgers along with a bunch of businesspeople was taken to meet Modi. The details of the visit, according to Hi India, are following:

— The trip was sponsored by a political action committee (PAC), the National Indian American Public Policy Institute (NIAPPI) founded by Shalabh Kumar, a Chicago businessman. An invitation circulated by NIAPPI in preparation for the trip said it was ‘limited to (an) elite group of American businesspersons’.

— The group has already met Modi in Ahmedabad and invited him to visit the US. On the schedule of an extensive trip is a stay at the Lake Palace in Udaipur, a visit to Karnataka as guest of the state government, a visit to the Taj Mahal, the tiger reserve at Ranthambore, a night at the Rambagh Palace in Jaipur, a visit to the Golden Temple in Amritsar and a dinner hosted by Punjab Chief Minister Parkash Singh Badal. A ‘Bollywood Extravaganza’ has also been included for the guests.

— The cost options given in the invitation were: ‘7 star trip’ (business class travel, private air charter in India) $16,000 per person, ‘4 star trip’ (commercial travel in India with visits to the palace excluded) $10,000 per person, and economy option-with all travel and hotel expenses borne by the individual- $3,000 per person.

Quite predictably, the story by Hi India has been grabbed for political exploitation. The Congress Party has been quick to latch on to the story and drop dark hints of wrongdoing here. In the process, they have said things which are come close to being libelous. For instance, Congress Party spokesman Rashid Alvi said it was a ‘shame that the Congressmen were paid for getting a visa and certificate of development for Modi’.

‘One feels ashamed over this kind of news. It is an insult to a nation. The Congressmen were given Rs 9 lakh (Rs. 900,000 which is a rough equivalent in rupees of $16,000) each so that America can give him (Modi) visa and a certificate of development.

‘This is unfortunate. If the money had been spent in Gujarat for the poor and development, then it would have been much better,’ he said.*

While there are very legitimate questions to be asked about who paid for the junket and whether the US lawmakers may have walked into some ethics questions, it is reckless to conclude straightaway, as the Congress spokesman seems to do, that they were ‘given’ $16,000 ‘each.’

‘All I would say is that our trip here was signed off by the appropriate authorities in our government… and specifically by the House of Representatives. I would simply say that three members of Congress don’t just leave the country,’ Congressman Schock has been quoted as saying.

‘So I am not going to get into all the nuances. Certainly some people do not like the fact that we are here… perhaps some people do not agree with what we are saying here… but certainly as American members of Congress we have a free right to come over here,’ Schock said.

‘I have checked appropriate boxes necessary to make this trip legitimate and well within all the rules and accordances of US Congress,’ he said.

NIAPPI’s Shalabh Kumar has said, ‘There is a very strong House Ethics Committee that disapproves or approves visits by Congressmen to other countries’.

‘So an organization like NIAPPI, that is a think-tank, sponsors visits, and trade people who want to go and establish business,’ Kumar said.

The assertion by Congressman Schock, who is known as much for his absolute political certitudes as he is for his youthfully ripped abs (he is only 32 years old), has to be viewed with seriousness when he says the trip was ‘signed off by the appropriate authorities in our government… and specifically by the House of Representatives.’ If that is indeed the case, the visit acquires a different dimension. The approval by the House of Representatives can then legitimately be conflated by Modi’s well-oiled PR machine to claim that political views about the chief minister in American political circles may be changing in his favor.

For Modi and the BJP, there is some gain to be made by flaunting such visits as the chief minister test waters before he possibly emerges as his party’s prime ministerial candidate in the 2014 parliamentary elections. After recent decisions by Britain and the European Union to end their unspoken boycott of the chief minister, the US remains a sticking point for him.

On the face of it, Modi may not be particularly perturbed by the continuing ban of a US visa for him in effect since 2005, he has to be equally conscious that when it comes to his national and international aspirations he cannot afford to be dismissive about it. He has to make amends at some point and it is in that context that such visits as the one organized by the NIAPPI play a part his rehabilitation among mainstream political circles in America.

Schock’s response does not necessarily settle the question of who paid for the visit but he is right in saying that members of the US Congress do not just leave the country. There is a clearly defined set of rules that governs such trips and they have to be ethically unquestionable. Nonetheless, there have been cases of lawmakers accepting freebies and running into ethics violations.

It is instructive how all the four lawmakers are Republicans, a party that has considerable ideological convergence with Modi and the BJP when it comes to advocating entirely unfettered business-friendly policies as well limited government.

(Mayank Chhaya is a journalist and author based in Chicago. The views expressed are personal and not of IANS. He can be contacted at [email protected])