In the recent couple of months, a lot has been said about the financial stress that the State of Himachal Pradesh has been undergoing due to mounting revenue expenditure, basically on account of unabated increase in the outgo on salaries, pensions, interest payments and other committed expenditure.

It has also been repeatedly mentioned that the Thirteenth Finance Commission grossly underestimated the committed expenditure on such items which has led to fiscal crisis. It may be recalled that the successive Central Finance Commissions have been underlining the need to completely balance the revenue account such that the revenue deficit is reduced to a zero level. 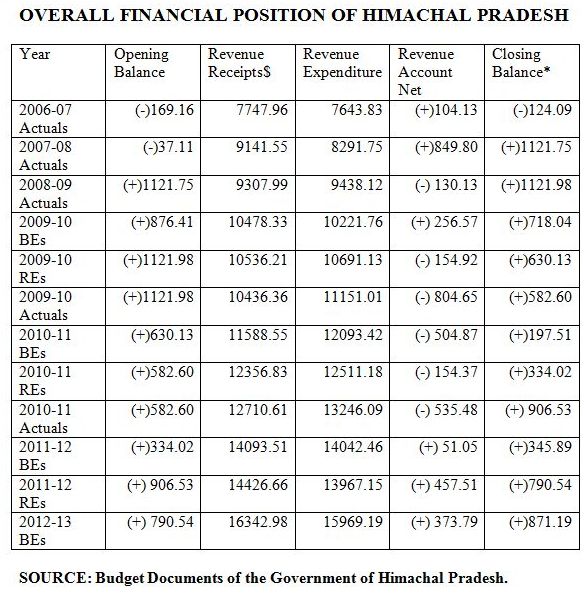 All figures are in Rupees crore.

In layman’s language it means that the revenue receipts are larger than the revenue expenditure. Now we look at the closing balance for various years. It presents a history of overall surplus position after taking into account the capital and loan accounts.

When a State has a history of budgets having surplus on the revenue account and it also has consistently positive closing balances, the story of the State being in a difficult financial situation does not hold much water.

In fact, using the revenue account surplus to finance the much needed capital expenditure and also to reduce the leaning on fresh borrowings is what fiscal prudence dictates.

Let us look at the individual years. For 2006-07, the actual data reveals that the fiscal year operations had an overall surplus since the opening deficit was mitigated by about Rs. 45 crore as the closing balance shows an improvement over the opening deficit.

For 2007-08, the year has a nominal opening deficit of Rs. 37 crore and the year ends with a closing balance of about Rs. 1,122 crore, indicating an overall improvement of Rs. 1,159 crore. Of this, the revenue account surplus contributes about Rs. 850 crore and the remaining improvement of about Rs. 309 crore in on the capital account. The surplus on the capital account is basically fresh loans contracted by the State Government.

Fiscal prudence would have demanded not to contract fresh borrowings for enhancing the closing balance without any commitment for higher capital expenditure and also for not raising the overall debt stock the servicing of which would impact the revenue expenditure on account of interest payments and capital expenditure by way of servicing the principal in the future years.

The line corresponding to the year 2008-09 actuals indicates that there was a revenue account deficit of about Rs. 130 crore but the opening and closing balances remained nearly static at Rs. 1,122 crore to Rs. 1,129 crore, respectively. Even in this year, the borrowings could have been reduced by at least Rs. 137 crore. The story of 2009-10 has been commented upon in the earlier paragraphs and needs no further discussion.

For 2010-11 and 2011-12, similar story gets repeated when one looks at the budget estimates or the revised estimates. The reality will emerge after we get the actual expenditure data as we go along.

One would like to leave this with a few comments. Firstly, if the revenue account generates a surplus for any fiscal, prudence demands that the State government should borrow less to improve its fiscal deficit position.

The bodings are that over the last six years, the revenue receipts and revenue expenditure aggregates have grown at about 12.9 per cent per annum each and if the State Government continues to manage its expenditure containment effort, it would end up with revenue account surplus on a sustained basis.

The more important message in this is that the interest payments burden has started getting restrained as a result of a series of efforts starting with debt reset, debt swap and rescheduling along with the debt capping prescribed by the successive Finance Commissions.

Therefore, there is an urgent need for expenditure compression on the salary burden. The maintenance expenditure for the existing infrastructure should be the highest priority so that the stock of infrastructure is put to good use for enhanced performance of the economy.

On the revenue receipts side, the future lies in revenues from the hydro-electric sector. The last decade and a half has not seen the desired frenetic activity to expeditiously harness the potential.

The future of hydro-electricity is not very long as other clean energy options tend to become competitive in pricing and more so, on the environmental considerations.

The State Government should have a clearly defined policy set up for a given time frame of at least 15 years and should not keep tinkering with it for various reasons best known to everyone. The revenues from State’s own taxes have an inherent constraint of growth due to the overall size of the economy and the diversity of the economic activity.

These will probably show a buoyant trend soon after the introduction of the composite Goods and Services Tax which has recently been cleared by the Union Government for a short run and then plateau out.

Secondly, the closing balance of a larger order being rolled over year after year also needs to be curtailed in a systematic manner to manage the fiscal deficit parameters.

Thirdly, the revenue account surplus indicates that the State government is abiding by its Fiscal Responsibility and Budget Management Act and deserves to be congratulated for that.

Lastly, as the revenue receipts of the State Government improve into future and it simultaneously takes charge of the revenue expenditure management, it should understand to expect less and less revenue deficit grants from the future Finance Commissions.

It may be remembered that the dispensation of the Thirteenth Finance Commission resulted in three of the Special Category States, namely Assam, Sikkim and Uttarakhand, becoming revenue account surplus after the statutory tax devolution. 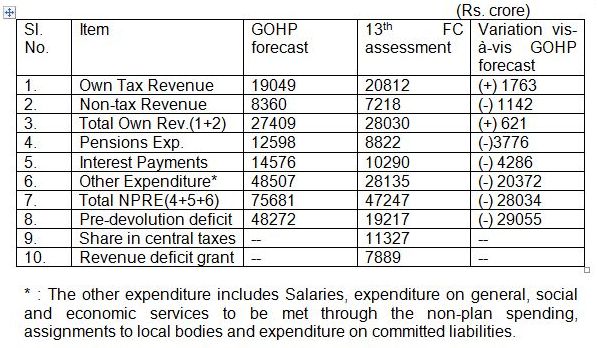