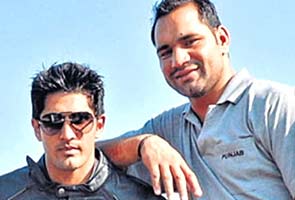 The other person dismissed Thursday is sub-inspector Sarabjit Singh.

Ram Singh, a head constable in the force, is a fellow boxer with Olympics bronze medal winner Vijender Singh, whose name also figured in the drugs controversy. He is being questioned in the case.

The Fatehgarh Sahib district police had on March 7 recovered over 28 kg heroin, worth Rs.130 crore in the international market, from the possession of Canada-based drugs dealer Anoop Singh Kahlon and had arrested him. The drug haul was made from Kahlon’s flat in Zirakpur, near Chandigarh, and his car.

Police have already questioned Vijender in connection with the drugs racket. The boxer has refused to give his blood and hair samples to the police.

Vijender, who is a deputy superintendent of police (DSP) in the Haryana Police, was questioned by the Punjab Police team recently.

A Punjab Police spokesperson said Thursday that sub-inspector Sarabjit Singh’s house at Naya Gaon near Chandigarh was raided Tuesday night and drugs and weapons were recovered. The police official has been absconding since the raids.

Another dismissed police official, Jagdish Bhola, who is wanted in the drugs haul case, and is absconding, had gone to Sarabjit’s house on March 11, police said.

“Sarabjit Singh is an active member of the gang of smugglers headed by Anoop Singh Kahlon and Jagdish Bhola. He aided Jagdish Bhola in absconding and arranged hideouts for Bhola,” the spokesperson said.

He said that 10 kg powder used as a rave drug in parties and worth Rs. 10 crore, was recovered from Kulbir Singh, a resident of Karnal, who has earlier been arrested in this case.

Amongst those arrested in the case are a Britain-based NRI, a retired deputy superintendent of Uttar Pradesh Police and a Canadian national.