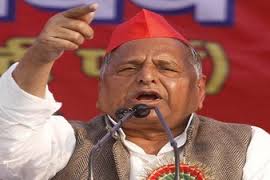 And on Holi, Samajwadi party chief Mulayam Singh Yadav’s renewed attack appeared to hint that his party’s love-hate relationship with the Congress could snap sooner than later.

SP sources say Uttar Pradesh’s ruling party is making a calculated move after a series of meetings of its strategy makers. The Congress has become dependent on the SP and the Bahujan Samaj Party (BSP) in the Lok Sabha following withdrawal of the DMK and the Trinamool Congress from the United Progressive Alliance (UPA).

Many in the SP view the Congress as a sinking ship and feel that any further bon homie with it could prove suicidal.

A senior SP leader told IANS that it was just a matter of time before the two parties go in for a political divorce, with the SP snapping its support to Prime Minister Manmohan Singh.

Asked why he was so confident as the SP had bailed out the Congress in the past, a senior Uttar Pradesh minister said: “The SP is now in for corrective measures to save its political space.”

He added that the SP wanted early parliamentary elections, by October this year, to ward off any anti-incumbency in the state.

“Everyone knows the Congress ditches everyone,” he said. “It is loud and clear that the Congress has lost public support and is now crippled by the withdrawal of support by allies like the Trinamool and the DMK.”

“The Congress is only worried about itself,” Chowdhary told IANS.

Chief Minister Akhilesh Yadav, who had so far pitched for “cordial ties” with the central government, has suddenly turned ballistic.

“The political situation (in New Delhi) is fluid, the UPA government is anti-people and the Samajwadi Party will take a decision on withdrawing its support (to UPA) soon,” he said.

“Any government which fails to heed to party’s vote bank and value its allies is set for doom,” Akhilesh Yadav told IANS.

Mulayam Singh does not hide his disapproval of the Manmohan Singh-led government and calls it a “government cut off from the real problems faced by the people”.

The Congress has started hitting back.

In the last one month, Uttar Pradesh leaders of the party have cornered the Akhilesh Yadav government in the assembly. The party has also launched public protests against the government.

According to Congress leader Pramod Tiwari, the SP government has failed on the law and order front.

Nirmal Khatri, president of the Uttar Pradesh Congress, is equally critical of the SP.

“There is lawlessness in the state, a senior policeman was killed, we can’t be mute spectators,” he told party workers recently.

Congress insiders point out that party vice-president and Gandhi scion Rahul Gandhi has also asked the party’s state unit to go all out against the SP government and highlight its failures.