Manali: Ahead of them stands a 100-foot-tall wall of snow and they are slowly cutting their way through the mass to connect this Himachal Pradesh hill resort to landlocked Lahaul Valley in the Himalayan slopes. 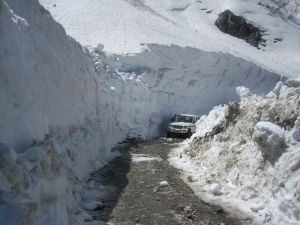 They are the dedicated men of General Reserve Engineering Force (GREF), a wing of the Border Roads Organisation, working to reopen for traffic the snow-marooned Rohtang Pass located at 3,978 metres in the Pir Panjal mountain range, 51 km from here.

Snow-clearing work started March 1 and it will take the men two months to reopen the 115-km road stretch between Manali and Keylong towns, Col. Yogesh Nair, commander of the 38 Task Force of GREF here, told.

Rohtang Pass is the gateway to Keylong from Manali in Kullu district, but it remains off-limits from the rest of the country for over five months due to heavy snow deposits on the road. This time, Rohtang shut down in mid-December and since then, people of the Lahaul region have been holed up in their region.

Nair said there was record snowfall in the region this season and the snow-clearing operation was a herculean task.

“The road stretch near Rohtang Pass is under 100 to 120 feet of snow. Unusually high. It normally experiences 70 to 80 feet of snow. We will try to reopen the Manali-Keylong highway by April-end,” he said.

Every year, after winter, GREF opens the Manali-Rohtang-Keylong highway by deploying more than 250 personnel and labourers.

The highway is also strategically important as it further connects to the forward areas of Jammu and Kashmir’s Ladakh region along the borders with China and Pakistan.

“Our men are working in Arctic-like conditions where chances of snowstorms and avalanches still loom large. Last year, our labourers were caught in a snowstorm but were evacuated safely,” he said. The effort of GREF working in snowy and harsh climatic conditions is commendable since a sudden drop in temperature, even in summer, can trigger winter-like conditions.

Oxygen near the Rohtang Pass is minimal and high velocity winds blow every afternoon.

GREF has provided special uniforms to workers which weigh around five kg while the weight of a pair of shoes is two kg. Anti-glare sunglasses and gloves are also part of their uniform.

With the help of global positioning system, engineers locate the road beneath the hill of the snow. After a bulldozer clears off the major snow, labourers manually clear the remaining snow with shovels.

Residents of two dozen small and scattered villages with a population of over 20,000 in the Lahaul valley are eagerly awaiting restoration of the road traffic.

A government-run helicopter, which also operates once a week between district headquarters Keylong and Manali, is the only mode of transportation for them these days.

“Since late last December, we have been cut off from the rest of the world. We are awaiting reopening of roads,” Mohan Bodh, a resident of Chokhang village in Lahaul, told.

The picturesque Lahaul-Spiti district is known for its sweet potatoes and bitter hops.