On 19th March, 2013, a poetry night was organized by the Caste-Away, a part of AIESEC, world’s largest youth-run non-profit organization in Hauz Khas village, Delhi. The initiative was based on the theme of Casteism and other forms of exclusion in our society at hand, both in rural and urban India. The program was sponsored by Kavi, an organization working for revival and development of poetry in living spaces for the past many years. 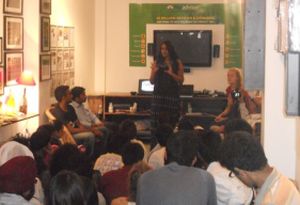 The evening was colored in poetry and noteworthy views on the related issue were shared by the participants in form of touching words.

The program also integrated well-compiled documentaries that showcased how Casteism and Untouchability are widespread in our society even after more than 60 years of independence.

While talking to Hillpost, Pragati Mitta, Project head of the initiative Caste -Away said “I along with some others in the group thought of starting the project in order to raise awareness against this evil in the Indian society.”

She besides Adhyaraj Singh are the working minds behind the valiant project that was initiated in April 2011.

“It is a myth that Casteism is only prevalent in the rural societies as urban India practices it to an extensive level too,” says Pragati.

The program was also assisted by volunteers from foreign countries. On being asked about the reason, Pragati said “Many countries other than India also put into practice a form of Untouchability though might not be similar to ours but equally evil.”

She also added that many of the foreign volunteers have undertaken the subject of Casteism as their PhD research topic in the country.

Dr. Kardam, a prolific Dalit writer who writes in Hindi also shared his views with Hillpost and discussed the issue in detail. The former Second Secretary in the High Commission of India in Mauritius, presently the Director in Cultural Hindi Telling Institute at Delhi said that more people should be made aware of this existing evil in the Indian society.

The author of popular Hindi novels such as “Chappar”, “Karuna”, “Talash” and poetry works like “Goonga Nahi Tha Mei” said that Dalit has to fight against all odds in order to reach at the top but if he is determined in his effort, nothing is impossible. He cited his own example and briefed how he started as a construction worker to reach prime positions in various government departments.

The poetry night was one of those much needed awareness campaigns against the evils like untouchability that can transform the insular mindset of the society indisputably.