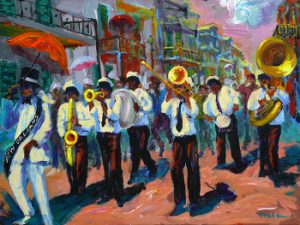 New Delhi (IANS) Fusion is the flavour of the new jazz being heard in India, Latin America and Europe, where this genre of music has either evolved as an extension of the New Orleans jazz spiked with local influences, or charted an independent path to address cultural diversity.

The 14 bands from 11 countries which flocked to the capital for the third edition of the Delhi International Jazz Festival-2013 at Nehru Park March 15-18 encapsulate this spirit of assimilation and cultural understanding.

The festival began March 15 with performances by “New Bone Quintet Band” from Poland, “Sylivie Bourban” from Switzerland and the Oscar Acevedo Quartet from Colombia.

Presented by the Indian Council for Cultural Relations (ICCR), the festival is using jazz as a “tool of cultural connect across Asia, north Africa, north America and Europe, Suresh Goel, director-general of ICCR, said.

“As part of the city’s culturescape, the festival has been working tirelessly to bring jazz artists from around the world. It uploads live webcasts to make it accessible to the global community,” Goel said.

The festival was an attempt to help music lovers in the capital understand and appreciate the musical traditions of other countries, and thus promote cultural dialogue, he said.

“Jazz to me represents openness and the freedom to create new content,” Goel said.

The Oscar Acevedo Quartet from Colombia will introduce Latin Jazz to the Indian audience. The genre is a fusion of local Colombian, Caribbean, Puerto Rican and Dominican music and classical jazz that thrives in the metro-hubs of the Latin nation.

“Latin jazz is a more permissive kind of jazz with a peppy dancing rhythm. It is good for the pub and good for festivals. Jazz is a contemporary genre of music – top of the exigency because of its theoretical approach. A high level of interpretation of jazz requires a lot of time,” Juan Alfredo Pinto, ambassador of Colombia, told IANS.

The journey of jazz around the world can be described as three-layered – “the music was born in the base (grassroots), went on to become elite and then began to democratise with “an extraordinary marriage with local traditions”, Pinto explained.

New Colombian jazz is all about its people, says vocalist Gina Savino, one of the pioneers of jazz vocals in Bogota, who is in the country for the jazz festival.

“I do my own music and a lot of improvisations which is not swing or traditional jazz. I normally try to tell a story through my music,” Savino told IANS. In her new project, “A Place”, Savino sings about the “Gereja people” – who are fighting the paramilitary forces. “They have lived through terrible realities,” she said.

Unlike Colombia, the origin of jazz in Poland has been classical, and the form was used by the Socialists in the 1940s to express freedom, says Anna Tryc-Bromley, director of the Polish Institute in the capital.

Bromley, who was accompanying the Polish ensemble, “New Bone Quintet Band”, said “the first jazz festival in Poland was held in 1956 after the death of the Russian dictator Stalin, who had put a leash on free musical expressions like jazz during his reign because of their associations with America”.

“Polish filmmakers like Roman Polanski, Jerzy Skolimowski and Andrzej Wajda have used jazz music in their films. There have been great Polish film jazz composers like Andrzej Trzaskowski and Krzysztof Komeda, who made beautiful European jazz music,” Bromley told IANS.

The music changed to a more contemporary and modern oeuvre after World War II, influenced by US, said Thomas Kudyk, composer and trumpeteer of the Bone Quintet.

Fusion is the soul of Delhi’s bustling jazz scene.

“All the offshoots like soul jazz, funk jazz, contemporary jazz and avant garde jazz have been done before. Now it is just fusing together and creating improvisational music,” said jazz musician Anirban Ghosh, who plays for the “Sushmit Sen Chronicles” and “The Grey Area”.

Dhar says he has grown up in the elitist loud Delhi, “hung around with the Punjabi guys using unparliamentary language and I am the son of a classical musician… all these influences have seeped into my music,” Dhar told IANS.

The audience for jazz in India is growing, summed up radio jockey Sarthak Kaushik, the host of the midnight Jazz Hour on FM radio every Friday. “I get pretty decent response for my show,” Kaushik said.