A story lost in its own setting——–a fantastically mis-directed and inadequately written film, Zila Ghaziabad is the most horrible re-establishishment of a real life story ever.

The word “unbearable” illustrated in the nastiest way describes the movie completely.

Presumably set out in Ghaziabad (though the real city doesn’t find feature anywhere in the backdrop) movie disastrously tries to reveal the notorious ways of the city during the 90’s. 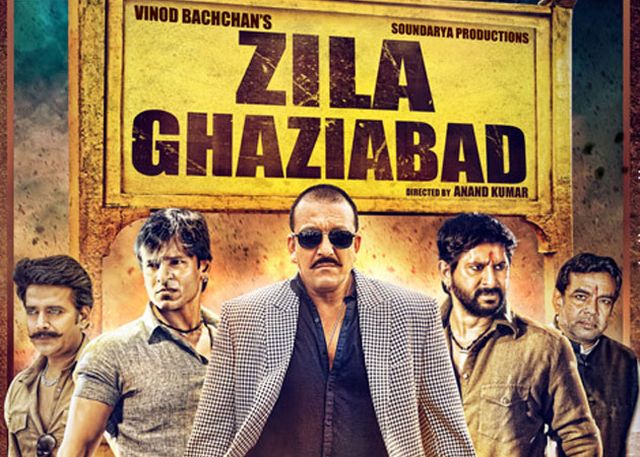 Purportedly based on an actual life rivalry between two Gujjar families of Ghaziabad, Satbir (Vivek Oberoi) and Fauji (Arshad Warsi) endorse the lead roles in the movie.

Chairman (Paresh Rawal) enjoys a stronghold over the village through his “goonda” aide Fauji who is involved in everything ranging from train-loot to dancing on item numbers.

Satbir is a young lawyer who runs a school for kids in the village and wants to do something for his native place. He believes in “Gandhian ways” till his life takes an unusual turn when Fauji kills his elder brother Chandrachud Singh.

A war erupts between the two gangs and  in the meantime Fauji shifts his loyalty towards Chairman’s bête noir Rashid (Ravi Kissen) due to misapprehension with him .

A self-styled cop Pritam Thakur (Sanjay Dutt) who loves reciting dreadful poetry and listening to songs from the movies “Saajan” and “Thanedaar” in idle hours is deputed in the city to bring calm to the place and ultimately he succeeds.

Almost all the characters lead “larger than life” roles in the film. Reprehensible demonstration of Gun-fires, booze, forgetful item numbers and very discomfited dialect (that is nowhere close to what’s actually verbalized in the city) labels the movie in short.

The movie comprises of actors that are trying to re-establish their careers in Bollywood but no immediate hope of light seems to await them at the end of the tunnel.

The movie keeps dragging and tries to recreate some effect in the second half but sorrowfully the largest part of the audience had left by then.

Vivek Oberoi and Arshad Warsi try their level best to fruitlessly bear the movie on their shoulders.

The previous release of Vivek lost hands down to Special 26 and this time Kai Po Che would inter-change the role with the last Bollywood blockbuster.

Paresh Rawal is insignificantly cast in the role of Chairman.

The movie is a clear adaptation of Dabangg series and the role of “larger than life” cop played by Sanjay Dutt clearly resembles that of Salman’s in the chartbuster.

Sanjay Dutt’s character is very confusing and leaves every one confused akin to the characters in the movie. The fight stunts involving him are too “Dabangg-styled” though others leave no stone unturned in depicting the same either.

The other scene where Vivek is accosted by his aides in the rain clearly bears a resemblance to the one in Shootout at Lokhandwala.

Only character that justifies his presence in the movie is Sunil Grover who pertinently plays role of putting “oil in fire” with his wicked ways.

All the characters bizarrely sport Ray Ban goggles despite the fact that the prized sunglasses maker is not the official sponsor of the movie.

Actresses Charmee Kaur and Minisha Lamba have been compulsorily stuffed in the narrative to create unrequired romance and glamour.

A comprehensive theatre artist like Divya Dutta goes wasted in an insignificant role yet again.

Chandrachud Singh makes a re-entry into Bollywood with his trademark inconsequential role in continuance with where he left many years back.

Soundtrack by Amjad-Nadeem lacks soul. The title tracks are clear adaptation of Omkara and Dabangg versions and dialogues for an   apparently serious thriller like this are too witty to digest.

Unfortunatley, there is not almost nothing that could be termed as positive in the film.

It feels very poignant for the director Anand Kumar who completely misread the vogue in audience for Dabangg styled movies and created this “agonizing” piece.

It would not be a surprise if the residents of the Ghaziabad city file defamation suit against the movie for portraying it in such a licentious taste. It is highly probable that the movie would not find many takers in the “Ghaziabad” city as well.

***The movie gets 2 stars on the scale of 5 from Hillpost.