Dharamsala (IANS) Why are Tibetans setting themselves afire in China? Protests against repression or a desperate attempt, as China holds, to get global attention to their cause?

The reason is simple: a total failure of China’s policy in more than 60 years of its rule in Tibet, says Thubten Samphel, director of the Tibet Policy Institute, a think-tank under the Tibetan government-in-exile, which last week released a white paper to find out reasons for self-immolation protests. 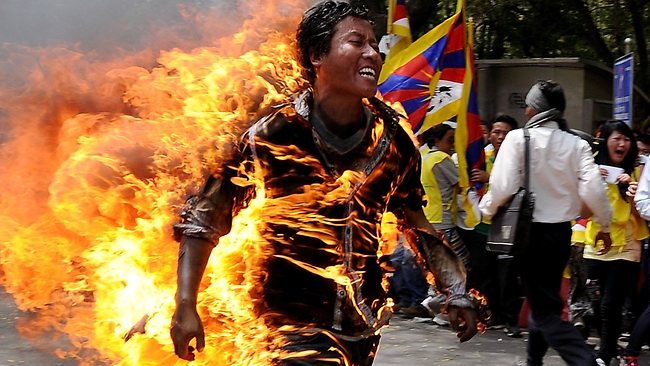 About 100 monks, nuns and lay people, a majority of them teenagers, have set themselves afire in Tibet since 2009 to protest against Beijing’s “repressive policies” and demand the return of the Dalai Lama to his homeland, says the Tibetan government-in-exile here.

Samphel said self-immolations have not sparked off overnight.

The Tibetans express this alienation by asserting their loyalty to the Dalai Lama whom they have not seen in their life and who has not set foot in Tibet for more than 50 years, it says.

But a state-run Chinese daily has blamed the Dalai Lama-led group of Tibetans of making “false charges” against the Chinese government.

The Global Times, a Beijing-based English langauge paper said in an editorial in January, that the Dalai Lama group “deliberately creates an atmosphere of terror to attract the attention of the international community and chases its political purposes by using the lives of young people”.

“There is a growing sympathy for Tibet amongst young liberal-minded Chinese. While His Holiness (the Dalai Lama) has been wrongfully vilified by the authorities and the state-sponsored media, he is increasingly popular amongst Chinese intellectuals, especially those abroad,” Tibetan government-in-exile’s Prime Minister Lobsang Sangay told..

“We have already appealed to Tibetans to refrain from such drastic form of protest. But if Beijing ends harsh measures, self-immolations will abate automatically,” said the 43-year-old Harvard educated Sangay.

A Tibetan rights group based here said the human rights situation in Tibet hit a new low in 2012.

Tsering Tsomo, executive director of the Tibetan Center for Human Rights and Democracy, said the Chinese government continued to “label all expressions of Tibetan aspirations and grievances as splittists and locked them up on national security grounds”.

The Dalai Lama has lived in India since fleeing his homeland in 1959. The Tibetan exile administration is based in this northern Indian hill town but is not recognised by any nation. India is home to around 100,000 Tibetans.