Making a case for seeking central assistance, the chief minister pointed out that the 13th Finance Commission had miscalculated committed liabilities in terms of salaries, pensions and interest of the state which has been put at Rs 3,522 crore for 2012-13 whereas it was likely to increase to Rs 4,043 crore in 2013-14.

The Prime Minister assured that the matter would be examined to bring down the fiscal deficit. 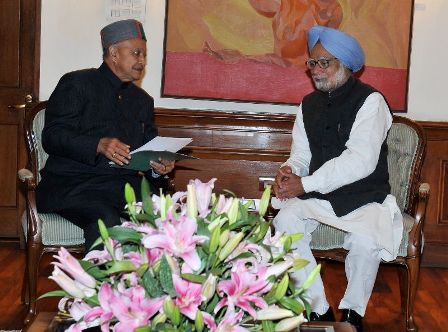 Though Himachal is among the special category states but central funding under Sarv Shiksha Abhiyan it was 65%, for Mid Day Meals Schemes, Indira Awaas Yojana 75%, Rashtriya Madhayamik Shiksha Abhiyan and Swaran Jayanti Gram Swarojgar Yojana it was 75% and under Nutrition Component of ICDS it was 50%. Even the ambulance service scheme under National Health Mission it was 20 % less for Himachal than other states in the category.

The chief minister requested for uniform funding of 90:10 ratio for all centrally sponsored schemes as was being given to some North East special category states.

He also sought resumption of special industrial package to accelerate industrial growth and generate employment opportunities. He urged for enhancing the package till 2020.

The chief minister advocated for states being allowed to accord environmental clearances for hydel projects as it was a clean source of energy. He said that delays were occurring because the powers resting with Ministry of Environment & Forests.

The Prime Minister was requested to intervene for restoring air services to Shimla, Kullu and Kangra and increase the frequency of air services keeping in view the states vast tourism potential.

The chief minister also sought restoring of special central assistance allocation for 2012-13, where the state was only being given Rs 793.92 Cr against the allocation amount of Rs 900 Cr.