Shimla: Denied the full term of 10 years of an industrial package that former prime minister Atal Bihari Vajpayee had announced for Himachal and Uttarakhand in 2003, chief minister Virbhadra Singh intends to seek its restoration in talks with Prime Minister Manmohan Singh.

Talking to media persons before leaving for Delhi, the chief minister said, “we plan to present our case for revival of the industrial package before the prime minister and other concerned ministries.” 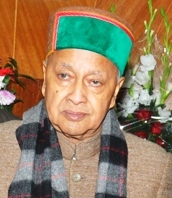 A high level official delegation was also leaving for Delhi to hold talks with union industry and commerce ministry for restoring the package that was curtailed in 2010.

Only Himachal and Uttarakhand had been denied the package, whereas the states of Jammu and Kashmir and north eastern states were continuing to benefit from it, said Virbhadra.

Talks would also be held related to expansion of rail network in the state before the upcoming railways budget. Provisioning for Bilaspur Beri rail line and expansion to Mandi and Manali would be stressed upon.

Stalled air services to airports in Himachal would also be put before the central government. “Tourism has severely been hit because of no flights to the state and the need for an international airport would be presented,” he said.

The state would also seek early release of its arrears from Bhakra Beas Management Board, something that the Supreme Court has adjudicated in favour of the state.

When questioned about cabinet expansion, the chief minister said that filling of two vacancies in the cabinet would be completed before the budget session in March.

He ruled out changing of departments with the ministers but said that more legislators would be appointed as parliamentary or chief parliamentary secretaries, besides nominating some as board and corporation heads.

He also said that presently there were no plans to change either the chief secretary or the director general of police (DGP).