Shimla: To streamline trade in apples, a fruit that sustains a large agri-economy in Himachal, the government is contemplating a legislation to ensure a level playing field in packaging for the benefit of consumers and growers, say top government functionaries.

Speaking to Hill Post, Vidya Stokes, horticulture minister said, “the apple trade has become very chaotic and a law should have been legislated soon after things started getting out of control.” 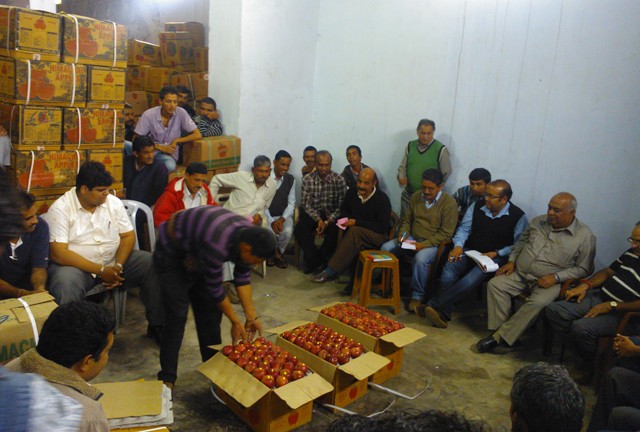 “We are in the process of formulating legislation for the purpose and all stakeholders, which include traders, carton box manufacturers and fruit growers would be consulted,” said Stokes.

“Trade in the fruit is distorted,” says Rajeev Chauhan, an apple grower from Jubbal valley, “as there is no standardized packaging. Some apple boxes hitting the market weigh 20 Kgs and some upto 28 Kgs.

“With neither, the buyer, the auctioneer or the seller, sure what price the produce would fetch for what quantity at the bidding, the entire business is prone to unfair trade practices and price manipulation,” says Chauhan.

To bring about uniformity, the proposed law intends to standardize packaging as is done in apple trading the world over, says the minister.

“Once a law in enacted, it would be ensured that it is implemented in letter and spirit,” she added.

Supporting the government move, Kamal Kashyap, an orchard owner from Kumarsain said, “till apples were sold in wooden boxes, only a standard amount of fruit in size and shape got to the market that enabled a fair comparison of market prices.”

With the introduction of a two piece telescopic carton in the late 1980s, the amount of fruit packed in one box began to vary from farmer to farmer and valley to valley.

Should the government be able to check the unfair practices by having a law in place, it would make it a level playing field for all where quality would benchmark the price and not quantity, said Kashyap.

Apple is the mainstay of the farm economy of many mid to hill regions of the state that contributes about Rs 2000 crore annually to an otherwise agriculture deficit economy of Himachal.