Chennai: The fuelling of the second stage of the Indian rocket that would sling seven satellites into space has been completed and it is expected to lift off around 6 p.m. Monday, an official of the Indian space agency said. 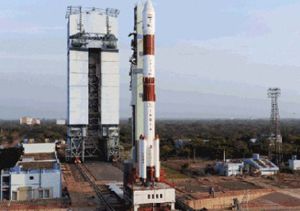 President Pranab Mukherjee is slated to witness the launch of the first of the 10 space missions planned by the Indian Space Research Organisation (ISRO) in 2013.

The seven satellites together weigh 668.5 kg. The entire flight sequence – lift-off to the ejection of the seventh satellite at an altitude of 794 km above the earth – will take around 22 minutes.

The successful launch of the satellites will take ISRO’s tally of launching foreign satellites to 35. ISRO started putting into space third-party satellites for a fee in 1999 on its PSLV-C2 rocket.

Since then India has been successful in launching medium-weight satellites for overseas agencies. Initially ISRO started carrying third-party satellite atop PSLC rockets as co-passengers of its own remote sensing/earth observation satellites.

Later in 2007, ISRO launched an Italian satellite Agile as a standalone luggage for a fee.

India began its space journey in 1975 with the launch of Aryabhatta using a Russian rocket and till date, it has completed 100 missions.

On Monday, the PSLV-C20 rocket will carry the 407-kg Indo-French satellite SARAL (Satellite with ARGOS and ALTIKA) as the primary luggage and six other satellites as piggy-back.

The SARAL will study the sea surface heights and the data generated will be shared by both the countries.

According to ISRO, the SARAL satellite is the first under the Indian mini-satellite bus-series 2 configured for 400 kg satellites.

The Indian space agency states this satellite frame is envisaged to be the workhorse for different types of operational missions in the coming years.

The phone will run several applications, including collection of data and take pictures of the earth with its camera.

Once all the satellites’ own operating systems have been checked out, key system functions will be transferred to the phone’s components to take control and operate the satellite, said SSTL on its website.

According to the CPA, the satellite NEOSSat will detect and track asteroids and satellites circling the globe every 100 minutes and scanning space near the Sun to pinpoint otherwise almost invisible asteroids.

The satellite will also be useful in tracking resident space objects, including space debris.

On the other hand, Sapphire will look for resident space objects that include functioning satellites and space debris circling between 6,000 km and 40,000 km above the earth.