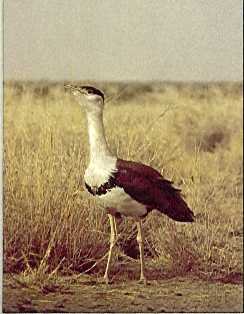 Dehra Dun: The union ministry of forest and environment has asked the Wild Life Institute here to undertake the conservation of the Great Indian Bustard, a species which is declining fast and only a few hundred of the birds can now be seen in the country.

Though it is said to have been found in Gujarat, Rajasthan, Madhya Pradesh, Andhra Pradesh, Karnataka and Maharashtra, but their numbers of the years have dwindled largely, forcing the union ministry of forest and environment to think on how to conserve the bird.

It is said that one of the reasons for the decline in the numbers of the Great Indian Bustard is that the birds move into Pakistan from the border areas Gujarat and Rajasthan.

In Pakistan it is said that permits are issued for hunting them, as it is considered a delicacy.

They claimed that the birds normally live in grasslands and as these areas are dwindling and there is more and more disturbance by man and cattle in these grass lands, its habitation has dwindled over the years, which is also a reason for their numbers going down.

Though not officially documented, it is said that immediately after independence it was decided to make the Great Indian Bustard the national bird, but it lost out. The reason it is said was that some members of the committee felt that some people could pronounce the bustard ad ‘bastard’, which could cause both humiliation and embarrassment.