New Delhi: The Delhi High Court Tuesday refused to interfere in the Delhi government’s notifications empowering unaided private schools to formulate their own criteria on nursery admissions and also asked the centre to consider the applicability of Right to Education (RTE) Act. 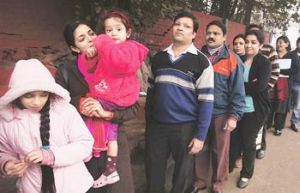 A division bench of Chief Justice D. Murugesan and Justice V.K. Jain said the government should consider amending the RTE Act as it is the “right time for the government” to include nursery admissions in it.

Following the court’s order, nursery admissions in the city will not be affected.

The bench, in the 33-page judgment said: “Though we have held that RTE Act is not applicable to nursery schools, in our opinion there cannot be any different yardstick to be adopted for education to children up to the age of 14 years irrespective of the fact that it applies to only elementary education.”

The central government had earlier informed the court that RTE did not apply to nursery admissions and a state government may have its own policies on the issue.

Additional Solicitor General Rajeeve Mehra, appearing for the central government, had told the court that as per section 13 of the Right of Children to Free and Compulsory Education Act, children between the age 6-14 years were covered by the provisions for free and compulsory elementary education and children below the age of six were not covered under the act.

The court’s order came on a petition of the NGO Social Jurist against the two notifications of the union human resource development ministry and the Delhi government’s directorate of education, empowering unaided private schools to formulate their own nursery admission criteria.

The bench observed that “importance of education is per se applicable to every child right from admission to nursery classes till it completes the eighth standard”.

It further said that though there is obligation on the state to provide free and compulsory education to children and the corresponding responsibility of the institution to afford the same.

Educational institution cannot be allowed to run as “teaching shops” as the same would be “detrimental to equal opportunity to children”.

“We only observe that to avail the benefit of the Right to Education Act to a child seeking for nursery school as well, necessary amendment should be considered by the state. We hope and trust that the government may take the above observation in the right spirit and act accordingly,” the court said disposing of the petition.

The petition by the NGO through advocate Ashok Agarwal alleged that these two notifications had given a free hand to all unaided recognized private schools.

It alleged that the notifications gave “a totally free hand to all unaided recognised private schools to formulate their own nursery admission criteria based on categorisation of children”.

The petition said the categorisations of kids in admission have specifically been barred by the RTE Act, adding that some schools still give preferences in admission on grounds such as religion, single parent, alumni and siblings studying there.