New Delhi: Megastar Amitabh Bachchan is set to spend the next three months in his ‘sasural’ (in-laws’ town) Bhopal as he begins shooting for Prakash Jha’s new film “Satyagraha”. 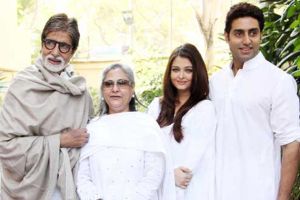 The 70-year-old finds it a tad tedious to move his base for a prolonged period of time, but he is fine with it.

“It is going to be a start to finish film, so ‘home’ away from home shall be the city of Bhopal, the ‘son-in-law’s’ city. The ‘jamai’ as they are known in most languages of the country.

“Setting up your room for the next three months, getting stuff from home in correct order has always been an exercise nothing less than moving house, which we all know is an arduous experience by itself. But I am happy to note that a sparse set up seems to be controllable, than one that is filled with material which is hardly used… but there,” he added.

The actor reached Bhopal Thursday and was accompanied by son Abhishek, daughter-in-law Aishwarya and grand-daughter Aaradhya, though they went back the same day.

“I brought along Abhishek and Aishwarya and little Aaradhya too with me in the plane, so they could meet their Nani, Jaya’s mother, who lives here, as also Jaya’s youngest sister and her family. The three A’s went back by the evening,” he posted.