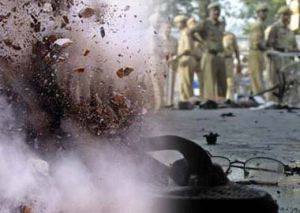 Talking to reporters after visiting the scene of the blasts and calling on the injured at one of the hospitals, Shinde said six of the injured were in a critical condition.

He said he can’t share more information as parliament is in session.

“The state government has already appointed an investigation team and the matter is being investigated now,” he said.

“There was no specific information that it (blasts) will happen in a particular area. A general alert has been sounded for the last two-three days and we have issued this alert to whole of the country,” he said, when asked about his earlier statement that the central government had issued an alert.

Shinde did not agree that police had failed.

“It cannot be said at this moment. One has to go into the details. If there was threat perception earlier, it will come in the investigations. It will be too early to talk on such lines,” he said.

“We will not leave any stone unturned. We will find everything. At this moment, nothing can be said. The matter is under investigation,” he added while refusing to comment on whether he suspects Indian Mujahideen’s involvement.

Shinde also clarified that no time limit can be set for the investigations.

Shinde later called on the injured at the city’s Care Hospital.