Shimla: To nurture talent and provide a platform where students and amateur filmmakers get a chance to showcase their productions alongside professionals, Youth Enlightening the Society (YES), an organization with an objective for apprising the youth, is to organize a two-day film festival at the historic Gaiety Theatre here in March.

Slated for March 23, 24, the Youth Film Festival is going to be a one of a kind, for which YES has invited entries from schools, colleges, amateurs and professionals.

The Youth Film Festival Shimla will be an opportunity for students, amateurs and professional film-makers to showcase their talent to local and worldwide audiences. YFFS will focus mainly on promoting and giving opportunity to emerging film-makers and to promote film-making in school students, says Aakarshan Chauhan, president of YES.

The organizers also intend to hand out prizes for the best entries in each film category.

Day 1: Screening of Competitive Entries in two (A & B) categories. 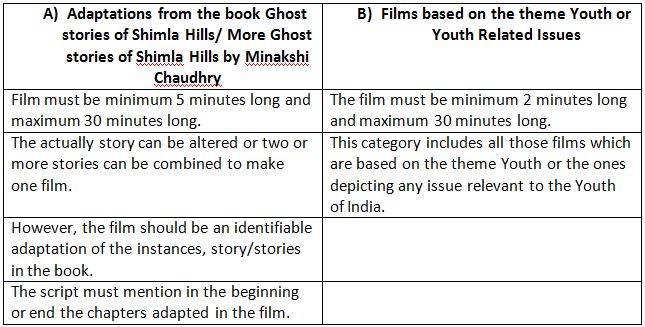 Day 2: Screening of films from all genres by young Indian film-makers followed by an award ceremony.

Awards, adjudged by the jury, will be distributed for the best film in both categories (A & B) in all three levels (Students, Amateur and Professional).

Gaiety Theater spanning the Mall road and the Ridge in Shimla is a famous British era building which has been home for cultural activities in Shimla since it was opened in 1887. The Theater has been renovated recently with the original structure untouched to make it more attractive whilst keeping its heritage preserved.

About Youth Enlightening the Society

Youth Enlightening the Society, is a non profitable, voluntary youth organization, registered under the Himachal Pradesh Societies Registration Act 2006. It started in January 2008 with the objective to help Youth of Himachal become Self reliant, Aware, Confident and Healthy (SACH).