Kolkata(IANS) West Bengal Chief Minister Mamata Banerjee might be a crowd puller as a politician, but this time it’s the painter in her that attracts people, even though her works vie for attention with those of masters like Jamini Roy and Rabindranath Tagore. 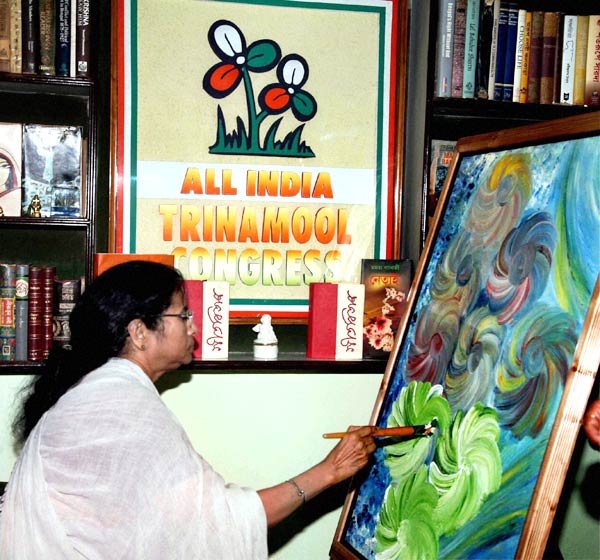 The city is currently hosting two painting exhibitions – one by Banerjee at the historic Townhall; the other by Roy, among the most celebrated artists of modern India, and the Tagores, including Abanindranath, founder of the Bengal school of art.

The masters’ creations are on display at the Chitrakoot Art Gallery – one of city’s oldest.

However, Banerjee’s exhibition – ‘A Dreamer’s Creation’ – has been hogging the limelight, getting regular visitors and buyers in the new year, while the show at the Chitrakoot Gallery has so far got only five visitors since its opening Jan 10.

“Since the inauguration of the exhibition, we have had only five visitors so far. There are 40 paintings in all and we are yet to find a buyer,” Prabhash Kejriwal of Chitrakoot told IANS Sunday evening.

In sharp contrast, the nearly 250 exhibits by the Trinamool Congress supremo have been attracting a steady stream of visitors as well as buyers.

“The average daily footfall is hovering arround 150-170 and a fair amount of the paintings have been sold,” Shivaji Panja, the curator, said. But he refused to share sales details.

Banerjee has announced that the entire proceeds from the exhibition will be used to fund her party’s campaign for the panchayat polls, slated to be held by the middle of the year. The exhibition opened Jan 2 and will continue till Jan 18.

Eminent painter Suvaprasanna, though, is unwilling to read much into the contrasting responses to the two exhibitions.

“Most of the paintings at the Chitrakoot have been regular in exhibitions, so the curiosity factor is low. On the other hand, there is lot of public curiousity about Banerjee’s paintings.

“But the lack of visitors does not and cannot be a comment on the timeless creations by the master painters. Banerjee’s paintings can never be compared to those of these great artists,” Suvaprasanna said.

Describing her painting exhibition as a humble offering, Banerjee said: “The exhibits depict life in its various shades and colors. This is symbolised by colorful flowers, blossoms, mother and child, fantasy, animals and the rising sun. Flowers bring joy, hope and cheer. These emit positive vibes and energy.”

While connoisseurs may express their dismay at the inconsistency, Banerjee’s political rivals have been accusing her of extorting money in the name of selling paintings.

“Is she a Picasso or a (Leonardo) da Vinci, that her paintings should fetch crores of rupees? This is ridiculous. Why should people buy her drawings for such hefty prices so that she can meet her party’s poll expenses? Why should industrialists buy them?” Communist party of India – Marxist leader Gautam Deb said.

“Banerjee should reveal the names of the buyers and the prices they are paying for the paintings. And we also need to keep a watch on whether they are getting any benefits from the government for buying these so-called paintings,” Deb said.