Shimla/Manali: With a picturesque blanket of white covering much of the landscape and a weekend beckoning, tourists today poured into Himachal Pradesh towns such as Manali, Dalhousie and Shimla.

The snow continued for day two today and would stay for the next four to five days, the weather office said. So tourists had the next week as well, much to the delight of hoteliers, restauranteurs and others in the hospitality business. 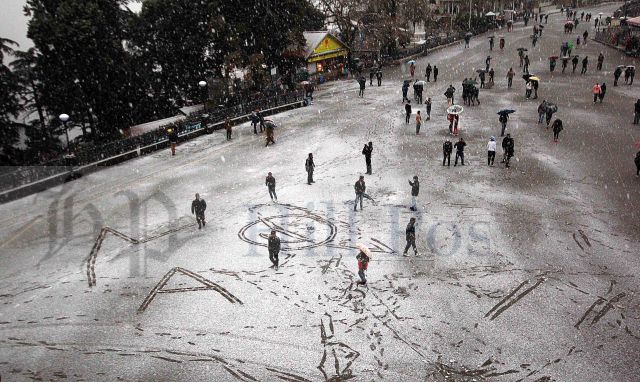 Shimla, the resort destination known for the imperial grandeur of buildings that were once institutions of power when it was the summer capital of British India, received 25 cm snow and 43.8 mm rain.

The town recorded a low of 0.1 degrees Celsius, while its nearby places like Kufri, Fagu, Chail and Narkanda experienced moderate to heavy snowfall, a Met department official said.

Manali, which saw a low of one degree below freezing point, received 51 cm snow, while its nearby hills like the Solang ski slopes, Gulaba and the Rohtang Pass (52 km from Manali) have been experiencing heavy snow.

“The higher reaches of Lahaul and Spiti, Kinnaur, Kullu, Sirmaur, Mandi, Shimla and Chamba districts have been experiencing moderate to heavy snowfall since Thursday, while mid and lower hills lashed with rain,” the official said.

Kalpa, some 250 km from the state capital, in Kinnaur district, and higher reaches of Dalhousie in Chamba district have also experienced snowfall.

As news of the snowfall flashed in the plains, tourists from the plains flocked to the state.

“We really enjoyed hurling snowballs at each other,” said Shruti Gupta, a tourist from Delhi who was in Shimla along with her parents.

He said vehicular traffic on the Chandigarh-Manali highway had been disrupted between Kullu and Manali.

“Work is on to reopen the Chandigarh-Manali highway near Patlikuhl.”

The Met department’s forecast said western disturbances – storm systems originating in the Caspian Sea and moving across the Afghanistan-Pakistan region – would remain active till Saturday.