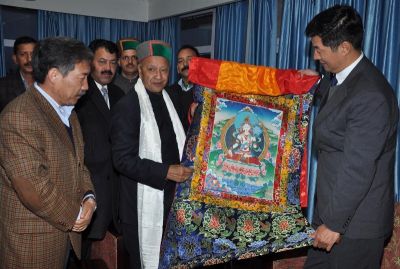 Dharamshala: Prime minister of the Tibetan Government-in-Exile Lobsang Sangay called on Chief Minister Virbhadra Singh here yesterday and presented a Thangka painting and Khatak (scarf) in honour of the new chief minister taking over power in the hill state.

A spokesman of the Himachal government termed it as a courtesy call by the elected political leader of the Tibetan Government-in-Exile.

The chief minister presented a Himachali shawl and cap.