Allahabad: It was a rare ‘sangam’ of technology and tradition on day one of Maha Kumbh 2013 Monday with Google map integration, GPS and ‘flying cameras’ making their advent in the 55-day festival, the biggest religious congregation anywhere in the world that is estimated to draw tens of millions from India and around the world. 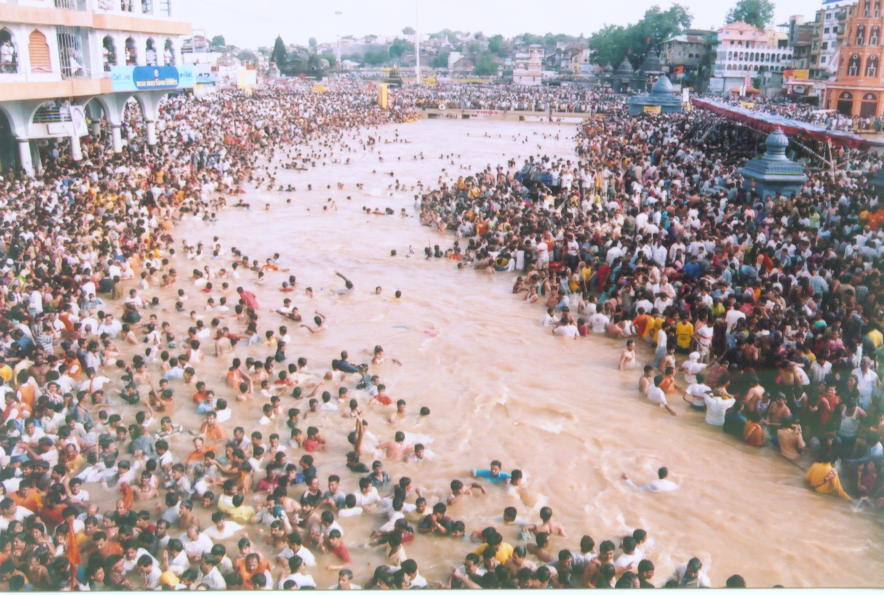 The Uttar Pradesh government has also spent about Rs.1.17 crore on 13 gigantic LED screens, which dot the mela premises at vantage points in this north India town that is playing host to the mega event.

These screens, some fixed and some on moving trucks, relayed events like the bathing and ‘aartis’ to faithfuls, who could not make it to the Sangam – the sacred confluence of the Ganga, Yamuna and Saraswati rivers – in this Uttar Pradesh town.

The other attraction, also a first, are the ‘flying cameras’ that have been positioned by the mela administration to click high definition aerial shots of the tents, sadhu camps and the multitude.

Millions of people are expected to congregate each day and cameras will record the devotees flocking to the 18 pontoon bridges constructed to ease the flow of people as they converge on the Sangam area, Arail and Jhoosi.

Rakesh Sharma, the chief executive officer of Prabhatam, the company that has set up the media centre for national and international media, said 10 OB vans have been stationed at the Sangam nose and would be telecasting live pictures. The feed would later be distributed free of cost to the televisions channels and whoever seeks to keep them. In addition, 30 computers, all connected to broadband and printers and scanners have also been provided to the media.

Also, in a first, the mela administration has gone in for Google map integration of the whole township. Every inch of space, officials say, has been accounted for. Through the global positioning system (GPS), the employees are surveying the land and all information collated has been put up on the website for easy access to journalists and other visitors.

The seers are equipped too. At many ‘akhadaas’, as each community of different sadhu sects are called, the holy men and their disciples are not only carrying latest gadgets like Android mobile phones, tablet note books and broadband connecting dongles, some vehicles of these sects, including a fleet of Mercedes, have GPS technology installed “just in case they get lost”.

An interactive map has been made online wherein one can see how the 4,000 camps have been allotted in the 193.5 hectare sprawling campus. In these maps, details of the sector markets, sector offices, ration shops and important religious places has been given.

The state government has also taken the opportunity to highlight its own achievements at the once in 12-year event billed the largest gathering of people in the world.

Small advertisements of the state government, highlighting the achievements of the 10-month-old Akhilesh Yadav government were also displayed. Shiva, in-charge of the Mumbai based company that put up these screens, was happy at the crowds gathered around the screen.

Though there was no audio, largely due to the hustle-bustle around, the state information department introduced subtitles elaborating on various public welfare schemes of the Samajwadi Party (SP) government.

“Other than highlighting the government’s policies and schemes like Kanya Vidya Dhan, the unemployment allowance, the healthcare activities, there are snippets showing the tourist attractions as well,” Prabhat Mittal, director of the state information and public relations department, told.

With all this technology in place, one visitor remarked, it would indeed be impossible for anyone to get lost in the Kumbh mela — a staple of many a lost and found theme in Hindi films.