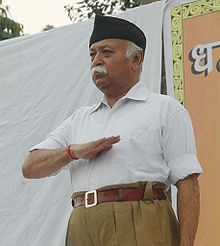 Indore/New Delhi: RSS chief Mohan Bhagwat stoked a new controversy Sunday with his comment that marriage was a contract and a man could disown his wife if she violates its terms of looking after his household.

Hours after the comments were aired by the media, RSS spokesperson Ram Madhav clarified that Bhagwat had been misrepresented and he had spoken about the western marriage system and not the Indian marriage system.

Speaking at a rally in Indore Saturday, Bhagwat said a woman is bound by contract to husband to look after him.

There was a theory of social contract and a deal is finalised between the wife and husband, said Bhagwat, who created a stir earlier this week with his claim that rapes hardly take place in rural but occur frequently in urban India.

“The husband says you take care of my house and I will take care of your needs, keep you safe,” Bhagwat said and added that they stay together till the contract works and if the wife violates it, he can leave her.

Asked about the remarks, Madhav said that the projection of Bhagwat’s views in the media was “very unfortunate”.

Bhagwat had Friday triggered a raging controversy with his remark that rape was primarily prevalent in Indian cities and not in rural India.

His remarks had drawn condemnation from the Congress, the Communist Party of India-Marxist and various women’s organisations but the Bharatiya Janata Party (BJP) said that RSS chief’s remarks had to be seen in proper perspective.