Islamabad (IANS) The India-Pakistan dispute over Siachen, the world’s highest battleground, is a “waste of resources” that could be put to much better use, a leading Pakistani daily said today, renewing a call for all troops and infrastructure to be removed from the area. 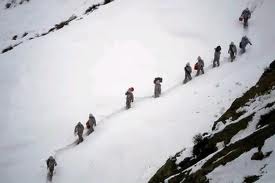 “Despite decades having passed, the two countries have been unable to come to a comprehensive agreement on this barren wasteland,” the Dawn said in an editorial.

Citing a recent study titled “Climate Data and Modelling Analysis of the Indus Ecoregion”, the daily said the Siachen glacier has lost 5.9 km of its longitudinal length between 1989 and 2009 due to rising temperatures.

The glacial ice mass has thinned by 17 percent, the daily said.

“Just as worryingly, the human presence in this region may also be affecting the neighbouring glaciers of Gangotri, Miyar, Milan and Janapa, which feed the Ganges, Chenab and Sutlej rivers, lifelines for millions of people,” it said.

“It would be pertinent, then, to renew the call for all troops and infrastructure to be removed from the Siachen area.”

It said there was “too much evidence now for even the most optimistic to deny that this planet is fragile and every country must do what it can to mitigate the effects its population may be having on ecosystems and the environment”.