Pong Dam (Himachal Pradesh): Over 27,000 bar-headed geese, the world’s highest-altitude migrant bird species, are “holidaying” in Himachal Pradesh’s Pong Dam wetlands along with around 100,000 other birds of 60 migratory and local species.

A wildlife official said the influx of the bar-headed geese at Pong Dam has increased enormously after a gap of two years.

“As per our initial estimates, the number of bar-headed goose could be more than 27,000,” said Assistant Conservator of Forests (Wildlife) D.S. Dadwal.

Ruddy-breasted crake – a bird species usually seen in marshy areas of northeastern India – has been recorded for the first time in Pong.

“Only one ruddy-breasted crake was spotted in the Sansarpur Terrace area. Their exact status would be known in the bird census to be carried out by the department Jan 28 and 29,” he added.

The Pong wetlands, spread over 307 sq km in the Kangra Valley, have the distinction of being one of the important winter grounds for some of the rare species from Central and Northern Asia. The Pong Dam reservoir is some 250 km from state capital Shimla and 190 km from Chandigarh.

The influx of birds, said the official, can be seen at swamps near Nagrota Suriyan, Budladha and Sansarpur Terrace. 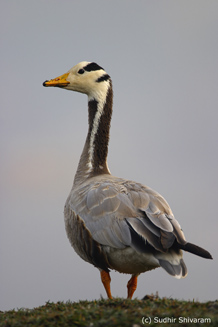 The goose, with two distinctive black bars across its neck, starts descending in wetlands in October and stays till March-end.

Records of the state wildlife department say the largest influx of the bar-beaded goose in the Pong Dam was recorded in 2010. At that time their number crossed 40,000.

The gregarious bar-headed goose feeds at night in grasslands on riverbanks and breeds in high-altitude lakes in Central Asia, including Tibet and Ladakh.

It’s listed under Schedule IV of the Wildlife Protection Act, 1972. Its population is believed to be declining due to hunting.

She said two bar-headed geese that were collared last year in Pong were again sighted here this time.

How to get there:

* By road from Shimla or Chandigarh.

* By overnight train from Delhi to Talwara, a prominent town in Punjab, from where the dam is located just 20 km uphill.

* For accommodation, there are small hotels in Talwara and a rest house at the dam, for which permission of the Himachal Pradesh Fishery Department is a must.