Shimla: Four days after moderate to heavy snowfall in Himachal Pradesh, more than 100 link roads across the state remained closed Monday, hampering the movement of traffic.

Officials said the road network in the higher reaches of Kinnaur, Shimla, Chamba, Mandi, Kullu and Sirmaur districts was badly hit and efforts were being made to reopen it. 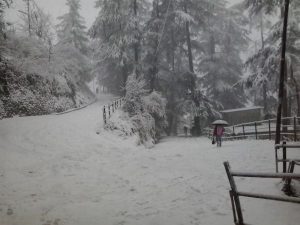 “Work is on to reopen the National Highway 22 beyond Shimla. The road link to Narkanda and Rohru is likely to be restored by this (Monday) evening,” an official of the Public Works Department told.

The Himachal Pradesh Road Transport Corporation (HRTC) has been operating buses for Rohru and Chopal areas in Shimla district via Vikasnagar in Dehradun district in Uttarakhand.

Officials said vehicular traffic on Shimla-Theog-Rohru road via Kharapathar, the shortest route, remained snapped on the fourth day as a thick layer of snow covered the road.

Buses from Shimla town to Rampur and Kinnaur district were plying via Dhami.

The road connectivity on the Kullu-Manali highway also remained snapped for heavy vehicles near Patlikuhl, some 20 km before Manali.

Officials said more than 150 buses of the HRTC and tourist vehicles were stranded in the state. “But there is no report of any tourist or local struck anywhere in the state due to snow,” they said.

At least five people have lost their lives in the state in the past three days due to snowfall.

Additional Chief Secretary (Revenue) P. Mitra confirmed that there were reports of five deaths in the state.

He said two people died when an avalanche hit Rangi village in Kinnaur district Friday, while one tourist from Delhi died Sunday when he accidently slipped near Kufri, a tourist resort near Shimla.

The internal roads in the tourists resorts of Shimla, Manali and Dalhousie were too slippery for the traffic movement after the snowfall.

Although the Shimla Municipal Corporation has cleared snow on the Cart Road and some VIP roads, most of the other roads have not been cleared so far.

Municipal Commissioner Amarjeet Singh said snow-cutters have been deployed across the town.

“We have made roads leading to the hospitals and government offices motorable. Now we are focussing on other areas,” he said.

Tourists have been facing much difficulty in the state capital Shimla as most of the parking lots are slippery and covered with good quantity of snow.

“I have to shell out Rs.500 for asking the potters to push my car out of the snow,” Vijay Chandan, a tourist from Delhi, said.

He said even walking in the streets was risky as these were laden with snow.