New Delhi: There was a perfect blend of indigenous military hardware and rich cultural diversity at India’s 64th Republic Day parade here today, as the country showcased its rapid military strides as well as its roots with the past.

Time was when almost all the hardware on display was of foreign origin. This time around, it was the the opposite barring few exceptions. And what was on view was itself an exercise in contrast. 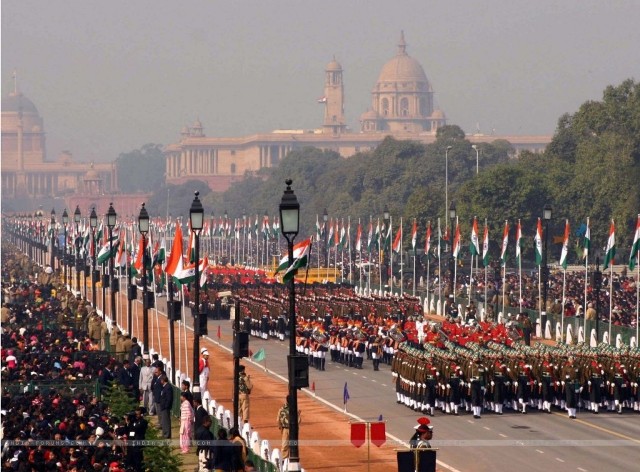 Bhutan King Jigme Khesar Namgyel Wangchuk was the chief guest – the third monarch from the Himalayan kingdom to get the status, after his father and grandfather.

The marching contingents from the armed forces, the paramilitary and National Cadet Corps vied for attention besides school students in traditional costumes and a breathtaking canvas provided by tableaux from 19 states and government departments.

The highlight of the 100-minute parade was the nuclear-capable 5,000 km Agni-V ballistic missile developed by the Defence Research and Development Organisation, flight-tested in April 2012.

Sent aloft from a self-contained road mobile launcher, the missile provides India genuine deterrence capability and brings it at par with an elite group of advanced countries.

Then there was the Arjun main battle tank that has long been in development and whose kinks have finally been ironed out, setting the stage for serial production.

Also on display was a versatile armoured amphibious dozer, indigenously developed to support combat engineers with its excellent earthmoving and amphibious capabilities in varied terrain.

The army’s mechanized column display concluded with a flypast by the Dhruv advanced light helicopter developed in the country.

Not to be outdone, the Indian Air Force displayed a model of its soon to be acquired indigenous “eye in the sky” atop an Embraer 145 airborne early warning and control aircraft.

The Indian Navy showed a replica of the INS Vikramaditya aircraft carrier being acquired from Russia and expected to be inducted this year to enhance its blue water capability.

Interspersed with the hardware were the marching contingents. Each comprised 144 personnel with a fair sprinkling of women and provided their own share of contrasts.

While the army columns were in the regulation olive green, a blaze of colour was on view in their turbans – blue and white, red and gold, orange and gold, deep green et al.

The navy was in black with white lanyards, belts and leggings, the air force in blue and the paramilitaries in khakhi.

And there was the music: well loved tunes like “Saare Jahan Se Aacha” and “Kadam Kadam Badaiye Ja” to name just two. 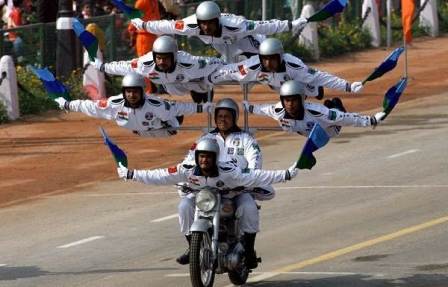 The parade was split almost equally between the military and cultural elements, the latter bringing up the rear.

As for the tableaux, these dealt with a variety of themes: homage to Swami Vivekananda (West Bengal), linking tradition with technology through pashmina (Jammu and Kashmir), houseboats (Kerala), 100 years of Indian cinema (information and broadcasting ministry), inclusion of people with disablities (social justice ministry), and seasons (Central Public Works Department) made up entirely of flowers.

A flypast by the air force provided the grand finale with the piece de resistance being a lone Sukhoi Su-30MKI streaking into the wild blue yonder in a Vertical Charlie manoeuvre.

The marching contingets go all the way to the 17-th century Red Fort in the city’s old quarters while the armoured units and the cultural pageants stop at the India Gate lawns.

The celebrations began on a clear and sunny morning with Prime Minister Manmohan Singh paying homage to the unknown soldier at the India Gate war memorial in the heart of the capital.

The National Anthem was played and a 21-gun salute boomed out.

That was the signal for the parade to roll down Rajpath, the grand boulevard that stretches three kilometres from Vijay Chowk at the foot of the Raisina Hill that houses the Rashtrapati Bhawan.