Sudhir Mishra is highly distinguished for directing critically acclaimed movies. His movies speak of his work, especially when we talk about directorial marvels like Jane bhi do yaroon, Hazaron Khwaishein aisi, Dharavi and Chameli.

All his movies carry a dash of grey and the climax completely contests the initial part of the movie; a revelation worth waiting for. The non-fussy movie making style could very well be termed as Mishra’s trademark. 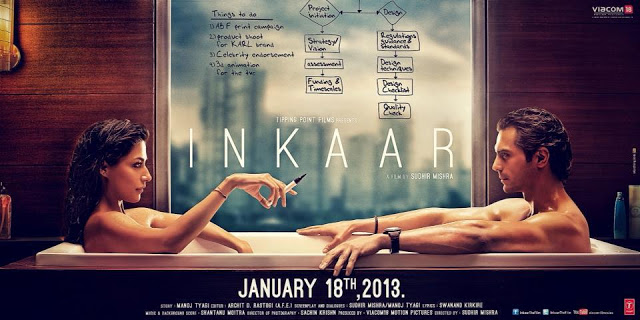 This time around the avant-garde showman takes up the issue of sexual pestering in the workplaces with the latest Bollywood flick; Inkaar. The movie is based on a sexually-volatile concept and the promos assured a lot in terms of entertainment. The central argument revolves around the famous squabble “Men are from Mars and women from Venus”.

The movie involves lots of brainstorming and those planning to spend their weekend with an entertainment packed masala flick should drop all such thoughts at the earliest.

Arjun Rampal plays Rahul Verma, CEO of a top notch advertising firm in Mumbai. He renders a courteous personality. Maya Luthra (Chitrangada Singh) is portrayed as a real independent modern woman with a zeal to succeed in life.

She experiences a dazzling rise from a copywriter to National Executive Director of the company with backing from Rahul, who poaches her from the rival agency and spruces her in all the nuances associated with the job.

Both of them get involved in an affair, though no other word could adequately describe their overly platonic relationship. The storyline meets the twist when Maya Luthra accuses Rahul of sexual-exploitation. He rebuffs the charges and a committee is appointed to explore the truth. The narrative oscillates between flashbacks and the current storyline. New multi-faceted equations surface as the investigation unfolds.

Arjun Rampal tries to bring in much needed charm to ease into the character but it becomes too much on the platter for him, ultimately. Eccentrically, it is the overly hyped and Mishra’s preferred Chitrangada Singh who seems to be totally out of sorts in the movie.

The uncertainty of the details that surface out during the interrogative sessions completely trespasses any sort of judgment taking shape within the audience. In short, the movie gyrates about everything except the storyline.

Shantnu Moitra’s tunes are hummable but could not grip the audience in the vein of his past electric compositions.

Arjun Rampal’s last movie Azab Gazab Love was  a box office washout. Wheresas, Chitrgandha Singh was recently seen in I, Me aur Hum, another dud at the box-office window but a lot more was expected from the lead pair and surely the director with the caliber of Sudhir Mishra.

Though, the movie did promise some revival in between but derails completely towards the end and messes up everything. Instead of illuminating the opaque nature of the ever present issue of gender discrimination in our society that needed touch of compassion and sensitivity, the movie dresses it up with a jovial touch with several bloopers in the script.

The movie entices “inkaar” from the most but worth a watch once especially if you are a die-hard Arjun Rampal fan. In short, substandard products arrive in lavish packages.

** The movie gets 2 stars on the rate of 5 from Hillpost.