New Delhi (IANS) The demand for steel in India is expected to rise 7 percent in the next financial year beginning April 1 as compared to the sluggish 5.5 percent projected growth in 2012-13, according to a senior official of Tata Steel. 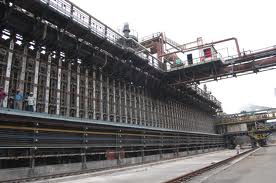 Managing Director H.M. Nerurkar said the overall outlook for the steel sector is positive and the demand was likely to pick up in the next financial year on the back of revival in economic growth and the government’s measures to ease infrastructure investment rules.

Weak demands have affected performance of major steel firms in India. Tata Steel, which is a part of the $100 billion Tata Group, posted a Rs.363.93 crore loss in the second quarter of the current financial year as against a profit of Rs.212.43 crore in the corresponding quarter of the previous year.

Tata Steel reported slowest sales growth in the second quarter of the current financial year since 2009.

“Formation of the cabinet committee on infrastructure for single window clearance for mega projects will generate activity in the power and roadways sectors, among others. The expected lowering of interest rates by RBI in January will provide impetus to the manufacturing and consumer durables sectors, among others. The full impact of all these will be felt in 2013-14,” Nerurkar said.

He said India was expected to emerge as the second largest producer of crude steel in the next two years.

“With the ongoing greenfield and brownfield expansions India is expected to become the world’s second largest producer of crude steel in the next two years,” he said.

India is currently the world’s fourth largest producer of crude steel after China, Japan and the US.

According to the government data, steel production is expected to reach 200 million tonnes by 2020 as compared to 71 million tonnes recorded last year.

In steel production, India is expected to leave behind USA and Japan in a couple of years. However, it will substantially lag behind China that produces almost 700 million tonnes of steel per year.

Nerurkar said steel demand in Europe is expected to rise next year after registering a decline in the current year.

“In Europe, we expect a modest 2.5 percent growth against the backdrop of a negative growth this year,” he said.

Tata Steel’s European unit, formerly called Corus, is the largest in Europe. The Tata Group, led by the then chairman Ratan Tata, had acquired the Anglo-Dutch Corus in 2007 for $12 billion. The company is now called Tata Steel Europe.