New Delhi:  India said that it will “convey its protest” to Pakistan over the brutal killing of two Indian soldiers in Jammu and Kashmir by Pakistani troops.

“We will convey our protest to the Pakistan government and our DGMO (Director General of Military Operations) will talk to his counterpart in Pakistan,” Defence Miniter A.K. Antony told the media.

“We are closely monitoring the situation,” Antony said.

The minister called the killings Tuesday by Pakistani troops “highly provocative. The way they have treated the body of the Indian soldiers, it is inhuman”.

External Affairs Minister Salman Khurshid told a television network, “We will take this up very firmly with the Pakistan government.”

He said the killing and mutilation of the Indian soldiers was “an extremely sensitive matter” and “a matter of great concern to everyone”.

“These are matters on which every dimension has to be examined very carefully before we say what we propose to do,” he added.

Indian officials said that Pakistani soldiers, said to be from the Baloch regiment, sneaked into Jammu and Kashmir Tuesday under the cover of a thick fog and killed two Indian soldiers and wounded a third.

Islamabad:  Amid escalating tensions on the Line of Control (LoC) in Jammu and Kashmir, a Pakistani newspaper Wednesday urged Pakistan and India not to let the events turn into a war. 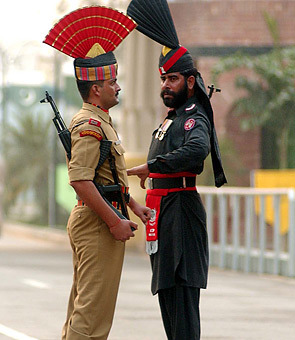 Calling the recent sequence of events along the LoC as disputed, The News International pointed to the varying versions emanating from New Delhi and Islamabad.

India and Pakistan “cannot, must not, allow (the killings) to propel” in the direction of war, it said.

Pakistan has accused Indian troops of killing one of its soldiers. Indian officials charged Pakistani troops with sneaking into Jammu and Kashmir and killing and mutilating two Indian soldiers.

“Serious as this incident is we cannot, must not, allow it to propel us in the direction of further confrontation,” it said in an editorial titled “Line of Fire”.

“The exact sequence of events around the incident in which one of our soldiers lost his life Sunday is, as ever, disputed.

“They (India) say that our (Pakistani) troops opened fire entirely unprovoked in the north Uri sector of Indian Kashmir and that the Indian troops responded and forced our troops to cease fire,” it said.

The daily referred to the death of two Indian soldiers in Sona Gali in Poonch district.

It said Sunday’s incident was the “most serious incident of recent times” since a ceasefire took effect along the LoC from November 2003.

“There have been numerous violations of the ceasefire, and each side accuses the other of failing to honour it and the entire border region remains highly volatile despite a thaw in relations over the last year,” the editorial said.

“Incidents such as this have the potential to put relations between the two countries back in the freezer unless they are handled with the utmost delicacy.”

The daily said the LoC — which divides Kashmir between India and Pakistan — was a “flashpoint along its entire length and has the capacity to derail the efforts of those with peaceful intent.

“It is not for us to adjudicate one way or another, but it is for us to urge moderation and restraint by all sides.”

It said that “neither nation needs or wants another war”.