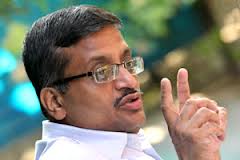 The officer had even ordered a probe into all land deals done by Vadra and his companies in the Gurgaon, Faridabad, Mewat and Palwal districts since 2005, a year after the UPA-1 government came to power.

After Khemka did the damage to the country’s political first family, the Hooda government went into an overdrive to undo it. Within days, the authorities of the four districts in the national capital region (NCR) gave a “clean chit” to the land deals done by Vadra and his companies.

That was not all.

The Hooda government set up a committee of top bureaucrats to look into Khemka’s actions. The committee has submitted its report and indications are that it has pointed out that Khemka’s actions as director-general of land consolidation were not under the laid down procedures.

But Khemka, who was shunted out last October as managing director of the Haryana Seeds Corporation, is not taking things lying down.

In his latest move, Khemka has, through a letter to the Haryana chief secretary this week, sought a copy of the committee’s report. He has even questioned the rationale of the committee submitting its report without even seeking his side of the story.

“Even a terrorist like (Ajmal) Kasab was given a hearing. Why was I not even called by the committee to know my side of the story,” Khemka was quoted by a vernacular newspaper here as saying.

Senior bureaucrats in the Haryana government point out that Khemka himself, while taking action in the Rs.58 crore Vadra-DLF deal in Manesar in Gurgaon district, chose not to send a notice to either side to seek their version.

“Procedurally, that is not correct. The other side has to be given an opportunity before action is initiated. In this case, the action seemed arbitrary,” a senior bureaucrat pointed out.

But Khemka continues to be unfazed. He has pointed out that the action taken by him can only be reviewed by the high court, and the state government did not have the jurisdiction to undo it.

“The affected party can go to a higher court if it is aggrieved by the action,” he has said.

Khemka was removed as DG-Consolidation last Oct 11. Though Hooda tried to project it as a routine transfer, it was apparent that Khemka was shifted as he opened the probe against Vadra’s land deals on Oct 8.

Vadra and his companies had purchased nearly 170 acres of in Gurgaon, Palwal, Mewat and Faridabad districts since 2005.

Though the United Progressive Alliance (UPA) government had come to power at the centre in 2004, the Hooda government has been in Haryana since March 2005.