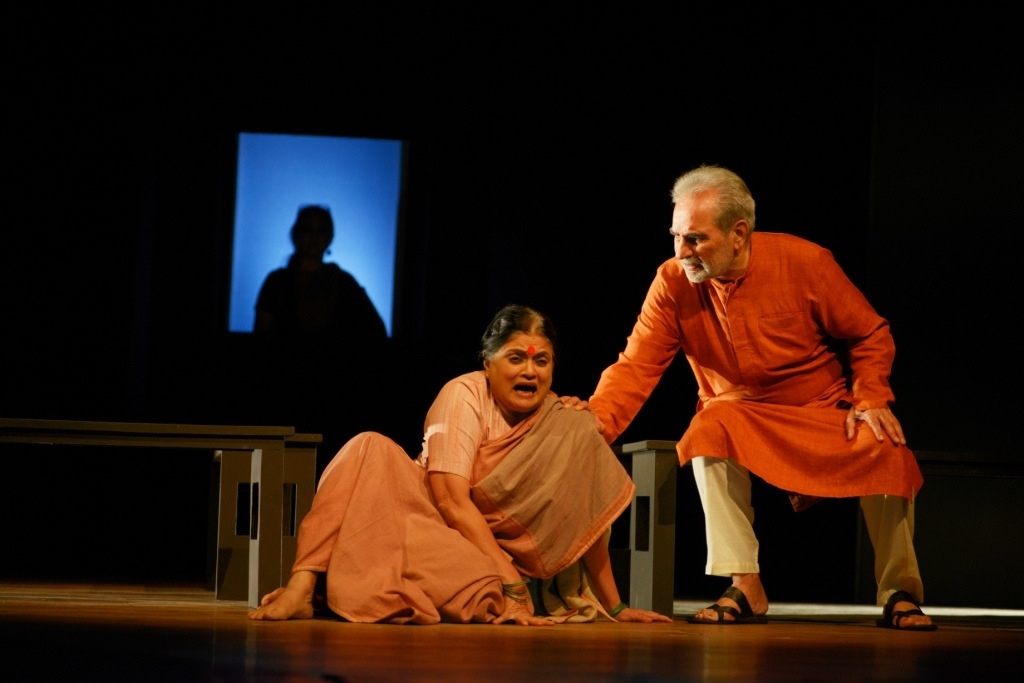 New Delhi: Veteran Bollywood actor Kulbhushan Kharbanda marked his return to the Delhi stage after 20 years at the inauguration of the 15th edition of Bharat Rangmahotsav, the National School of Drama’s annual theatre fest that opened Jan 5.

Forging a new connect with a younger audience was not easy for the 68-year-old actor, who says he was “a bit dishonest with the stage for the last 20 years,” talking of theatre as a first love, long betrayed.

Kharbanda, known for his layered portrayal of complex characters in social dramas on screen, returned to play an aging writer coming to terms with his dreams, ideals, loneliness and tangled relationships in Mahesh Elkunchwar’s “Atmakatha” directed by Vinay Sharma.

Kharbanda tied up with a troupe with which he has long been associated, the Kolkata-based Padatik, for this production.

“The last time I was on stage in New Delhi was in 1995 with Padatik. We staged ‘Sakharam Binder’ (Vijay Tendulkar) after a lull of six years. We were at the Nehru Centre with another play, ‘Guinea Pig’. The theatre scene has changed since then. There is a healthy audience for theatre now, which is a good sign,” Kharbanda said at the Kamani Theatre in an informal chat.

“I fell from a horse and broke my limb. It had to be operated upon. As I lay in hospital, I used the time to read. Vinay (playwright Vinay Sharma) told me to read the script and I liked it,” Kharbanda said.

The plot revolves around 78-year-old Rajadhyaksha, a nationally acclaimed writer who is dictating his autobiography to Pradnya, a researcher. The exercise of writing the “Atmakatha” becomes a journey in time for the writer, who copes with reconciling the man he really is with the persona he attempts to project.

As Rajadhyaksha speaks to his biographer of his worldview, he finds his own world crumbling with a telephone call from his ex-wife, Uttara.

Uttara wants to publish an anthology of the letters that Rajadhyaksha wrote to her – not to make any “capital” from it, but to voice her side of their story in a comment on the gender balance in Rajadhyaksha’s life.

Uttara’s call is like a beacon – opening up a web of complex relationships in the writer’s life, including an illicit affair with his sister-in-law Vasudha and an illegitimate son.

The play ends with the characters looking inwards, searching for forgiveness. The treatment of the play though a trifle clumsy, in the style of the 1980s with melodrama and excessive verbiage, holds unexpected twists.

“I haven’t been able to devote much time to theatre. Call it ‘baimani’ (treachery) and a little dishonesty on my part. But I have been in love with theatre since school,” Kharbanda says.

The actor rues the lack of original scripts in Hindi theatre. “Theatre scripts in Hindi need a special technique… But if there is an audience, we should be seeing new scripts. But it does not seem to have moved beyond Mohan Rakesh,” he said.

Kharbhanda recalled that in 1967-1968, “A group of like-minded actors in Mumbai led by Rajindernath formed Abhiyan – a theatre platform that translated language plays from across the country to Hindi.”

“We had pledged never to stage adaptations of western plays. Abhiyan took playwrights like Badal Sircar and Vijay Tendulkar to Hindi readers and audiences, bridging the divide,” he said.

And how was the experience of returning to theatre?

“The stage needs dedication and discipline. The audience is in front of you and memorising the lines was difficult,” he said.

“Shooting in single-takes and dependence on the director without thinking about an immediate audience to connect to me had re-oriented my sensibility as an actor,” Kharbanda said.

“Cinema is vast,” the actor says, signing off as if beginning a new conversation.