Shimla: Interior valleys in the hills are still facing the brunt of last week heavy snowfall as they remain cut from the outside world, are without electricity for the fourth consecutive day and are unable to meet even emergency medical needs.

Top district administrative official Dinesh Mahlotra said that the Kalka, Shimla, Theog, Narkanda, Rampur highway had been cleared upto Theog and was open to traffic. “It would take another day to clear the road to Narkanda,” he added.

However, many in the rural area were sore with the slow pace in opening up roads or repairing the transmission line. Narinder Sharma, a resident of Narkanda said, “a lot of heavy machinery is available nowadays but highway is blocked since four days and nobody knows when it would open.” 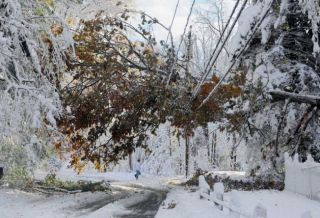 Having to cope up with no electricity, Saroj, a housewife for a Kotgarh village said, “we have been transported back to the dark ages. What worse there seems to be no urgency to restore the electricity supply as hardly anybody is out working.”

The unusually heavy snow has also left a trail of destruction and many orchards have suffered extensive damage to standing trees. Huge cedar trees that were unable to bear the load of snow have uprooted and devastated plantation orchards, snapped power lines and at places have also damaged houses.

The district administration is gripped with restoring road connectivity and the damage assessment would only be done later, sources said.

Life in the city was limping back to normal as sub-zero night temperatures froze water pipes and layers of ice on road made it difficult for vehicles to move about in the morning, something that even walkers found hard to negotiate in the morning hours. As the day warmed out and the freeze melted out, human and vehicle movement picked up.