Shimla: “What’s in a name?” Quite a bit, if it’s Himachal Pradesh and the name is Atal Bihari Vajpayee. Less than a month after taking power, the Virbhadra Singh-led Congress government has begun the task of erasing the former prime minister’s name from myriad schemes. 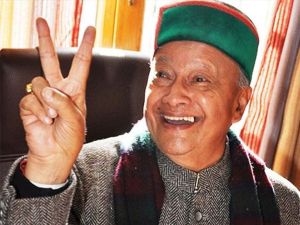 Of the dozen odd schemes named after the Bharatiya Janata Party (BJP) leader when the party ruled the state, one has been scrapped, one renamed and a third is caught in political logjam.

While the plan to distribute bags with Vajpayee’s photograph has been axed, the name of Atal Swasthya Seva, a free ambulance service, has been changed.

The process is now on to stop the Atal School Uniform Scheme that benefits around 10 lakh students.

Under the flagship programme of the previous BJP government, free school uniforms twice a year are provided to all students from Class 1 to 10 in state-run schools.

The government’s decisions have not gone well with former chief minister Prem Kumar Dhumal, who initiated all the schemes.

“Being in power is a transitional phase. When we will come to power, we will leave with no option but to do the same,” Dhumal told.

The two-time chief minister said Vajpayee was one of the successful prime ministers of the country.

Official sources said the government had issued directions to stop distribution of uniforms under the scheme till the cabinet takes a final call.

“The government may either scrap it or re-launch it by providing cash incentives directly to the beneficiaries. It may even allow it to continue in the same format by renaming it,” an official said.

The Rs.62 crore scheme was launched by then BJP chief Nitin Gadkari in May last year.

Earlier, the BJP had objected to the government’s decision to stop free ‘Vajpayee bags’ scheme. The Dhumal government had launched it Aug 15 last year – a free carry-bag was provided to every ration card holder once a month for carrying goods.

“The government should not set a wrong precedent by destroying the ration bags carrying Vajpayee’s picture or changing the name of Atal Swasthya Seva,” Dhumal said last week.

Health Minister Kaul Singh has directed the authorities to remove Vajpayee’s name from the ambulance scheme.

“After discussing it with union Health Minister Gulam Nabi Azad, we have decided to give the central-funded ambulance scheme a common name that’s prevailing in other states too,” Health Minister Kaul Singh told.

“It will now be named the National Ambulance Service. The photograph of the former prime minister will be replaced with the National Rural Health Mission (NRHM) logo,” he added.

On Vajpayee’s birthday in 2010, Dhumal launched the round-the-clock free ambulance service across the state. At present, 125 ambulances are operating.

In its five years (December 2007-12) at the helm, Dhumal dedicated about a dozen schemes and projects to Vajpayee.

The first among them was the Atal Bijli Bachat Yojna under which four CFLs (compact fluorescent lamps) were provided free to 1.65 million domestic electricity consumers.

The fate of the other ‘Vajpayee schemes’ is still uncertain but the writing is on the wall.